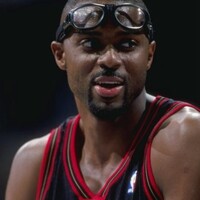 Harvey Grant net worth: Harvey Grant is an American former professional basketball player who has a net worth of $8 million. Harvey Grant was born in Augusta, Georgia in July 1965. Harvey is the identical twin brother of former NBA player Horace Grant. Harvey was a 6'8″ small forward and power forward. He attended Hancock Central High School and played college basketball at Clemson, Independence Community College, and the University of Oklahoma. Grant was the #12 pick by the Washington Bullets in the 1998 NBA Draft. He played for the Bullets from 1988 to 1993 and then the Portland Trail Blazers from 1993 to 1996. Grant played for the Washington Bullets / Wizards again from 1996 to 1998 and then finished his career with the Philadelphia 76ers in 1999. His son Jerai has played professional basketball overseas while his son Jerian plays for the University of Notre Dame and his son Jerami was drafted #39 by the Philadelphia 76ers in the 2014 NBA Draft.