What is Hakeem Olajuwon's net worth?

Hakeem Olajuwon is a retired Nigerian-American professional basketball player who has a net worth of $300 million. Hakeem Olajuwon played in the NBA for the Houston Rockets and Toronto Raptors, the former of which he led to back-to-back NBA championships in the mid-90s. Additionally, he was a member of the gold medal-winning Olympic US team in 1996. Considered to be one of the greatest basketball players of all time, Olajuwon is the first non-American to be an All-Star and an NBA MVP.

After retiring, Hakeem embarked on what became a highly-successful entrepreneurial career. In the last two decades he has transacted in well-over $150 million worth of real estate purchases.

During his NBA career, Hakeem earned $110 million in salary. His highest-earning year was the the 2000-2001 season when he made $16.7 million from the Houston Rockets. That's the same as earning around $27 million in today's dollars.

Hakeem Olajuwon was born in 1963 in Lagos, Nigeria to Yoruba parents Abike and Salim, who owned a cement business. During his childhood, Olajuwon played as a soccer goalkeeper. Later, while attending the Muslim Teachers College, he began playing basketball when he entered a local tournament. Olajuwon subsequently immigrated to the US to play basketball with the University of Houston Cougars. After redshirting his freshman year, he became the Cougars' sixth man. It was around this time he earned the nickname "The Dream" due to his effortless dunking. In both his sophomore and junior years, Olajuwon helped lead the Cougars to consecutive NCAA championship games. Although the team lost both times, Olajuwon won the 1983 NCAA Tournament Player of the Year award.

Start with the Houston Rockets

In the 1984 NBA draft, Olajuwon was selected first overall by the Houston Rockets. His rookie season was an instant success, as he drastically improved the Rockets' win-loss record. He finished the season runner-up to Michael Jordan in the Rookie of the Year voting. More success came the next year, as Olajuwon helped the Rockets advance to the Western Conference Finals, which they won. The team next went to the NBA Finals, ultimately losing in six games to the Boston Celtics.

For the 1988-89 season, Olajuwon was the undisputed leader of the Rockets, finishing as the league leader in rebounds with 13.5 per game. Although the Rockets faced disappointment the next year, Olajuwon continued his personal professional success, leading the league in rebounds and blocks. He also recorded a quadruple-double, becoming only the third NBA player ever to do so. Following a bad 1991-92 season, Olajuwon improved his passing and set a new career-best of 3.5 assists per game in 1992-93. Also that season, the Rockets posted a new franchise record with 55 wins. Meanwhile, Olajuwon finished second to Charles Barkley in the MVP race.

Championships with the Rockets

Due to his enormously successful performances in the 1993-94 and 1994-95 seasons, Olajuwon earned a reputation as one of the top centers in NBA history. He led the Rockets to the 1994 NBA Finals against the New York Knicks, winning the title in seven games to bring Houston its first professional sports championship in over 30 years. With his 26.9 point average per game, Olajuwon was named the NBA Finals Most Valuable Player; this made him the first foreign-born player to receive that award. Moreover, in 1994, he became the only NBA player ever to win the MVP, the Championship title, the Finals MVP, and the Defensive Player of the Year award in a single season.

The Rockets repeated as NBA champions in 1995, sweeping the Orlando Magic. Olajuwon averaged 27.8 points and 10.8 rebounds during the season, and in the game that clinched the series, recorded 39 points and 17 rebounds. Once again, he was named the Finals MVP, and became the only Rockets All-Star. 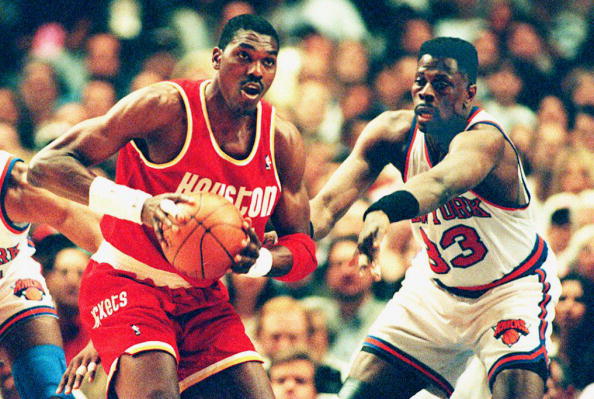 During the height of his career, Olajuwon was selected as a member of the 1996 US Olympic basketball team, dubbed Dream Team II. Playing alongside five members of the original Dream Team, plus Shaquille O'Neal, Olajuwon and his fellow American players won the gold medal for the tournament.

Final Years with the Rockets

Olajuwon's run of success with the Rockets ended when the team was eliminated in the second round of the 1996 NBA Playoffs. However, the next season, they recorded a 57-win season with Charles Barkley on the roster. During the 1998-99 season, Olajuwon's scoring production improved, helping him make his 12th and final All-NBA Team.

After turning down a $13 million deal with the Rockets, Olajuwon was traded to the Toronto Raptors in 2001. He was ultimately unable to replicate his past triumphs, averaging career lows of 7.1 points and six rebounds per game. Due to a back injury, Olajuwon decided to retire in the fall of 2002 after only one season with the Raptors. Ultimately, he ended his professional playing career as the all-time league leader in total blocked shots, with 3,830.

Following his retirement from the NBA, Olajuwon found significant success in the Houston real estate market.

According to a 2006 New York Times profile, Hakeem up to that point had transacted over $100 million worth of real estate purchases. Hakeem specializes in buying properties that are ripe for development via public improvements like stadiums or train stops. For example, he buys large undeveloped plots of land near transportation lines and popular highway exits. In November 2006 he bought a 41-acre property near NASA's Johnson Space Center and developed it into a retirement community. He owns parking garages, apartments complexes, commercial buildings and single-family homes. He purchased Houston's former Federal Reserve Bank building and converted it into a mosque. He owns the city's former World Trade Center building not far from Minute Made Park.

As a Muslim, Hakeem does not borrow money for his acquisitions (it's against Islamic law to pay or charge interest). This has allowed him to minimize risk and exposure when the real estate market softens. In that New York Times profile, Hakeem explained:

"I have been blessed thus far to be able to work with my own capital, which gives me the ability to decide when I want to sell as opposed to having a bank loan hanging over my head that in some cases, can force you to sell even though you may not be ready to."

Being an all-cash buyer has also allowed him to beat out competitors – who are relying on bank approvals – for key deals.

In 1996, Olajuwon married Dalia Asafi. Together, the couple has four children: daughters Aisha and Rahmah and sons Abdullah and Abdul. Olajuwon also has a daughter named Abisola from a previous relationship.

In 2006, Olajuwon opened the first of his Big Man Camps, where he teaches young players how to play in front court. Additionally, he works with other NBA players to help them perfect their moves.

In addition to English, Olajuwon has fluency in Arabic and French, as well as the Nigerian languages of Ekiti and Yoruba. Olajuwon is a practicing Muslim, and has talked about studying the Qur'an every day. 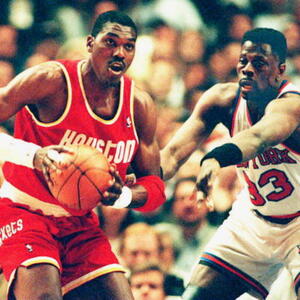