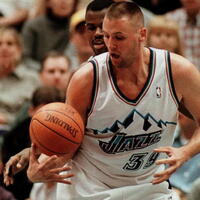 Greg Ostertag Net Worth: Greg Ostertag is a retired American professional basketball player who has a net worth of $20 million. Born in Dallas, Texas, in 1973, Greg Ostertag played college basketball for the University of Kanas Jayhawks from 1991 until 1995. The seven-foot-two, 280-pound center was chosen 28th overall during the first round of the 1995 NBA Draft by the Utah Jazz. Ostertag went on to spend close to the next decade with the Jazz until he joined the Sacramento Kings from 2004 until 2005. In 2005, Ostertag returned to the Jazz for the next two seasons. He took time off from the game until 2011, when he came out of retirement and played with the Texas Legends of the NBA's D-League until 2012. Ostertag's comeback ended after he suffered a knee injury while playing with the Legends. He finished his pro playing career never having been a member of a losing team. Ostertag's career statistics include 3,512 points to go along with more than 4,100 rebounds and 1,200 blocked shots. In 2002, while with the Jazz, Ostertag made headlines for donating his kidney to save his sister's life. When he returned to the court, he did so as the first NBA player to ever play after having donated an organ.