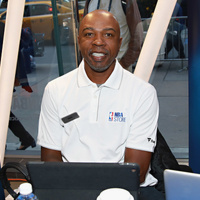 Greg Anthony net worth and salary: Greg Anthony is a former American NBA basketball player who has a net worth of $10 million. Anthony is currently a lead commentator for CBS Sports and also contributes to Yahoo! Sports as a college basketball analyst. His NBA career spanned from 1991 to 2002, and during his decade as a professional basketball player, Anthony played for the New York Knicks, the Vancouver Grizzlies, the Seattle SuperSonics, the Portland Trail Blazers, the Chicago Bulls, and the Milwaukee Bucks. He was born on November 15, 1967 and raised in Las Vegas, Nevada. As a child, Anthony aspired to enter politics and had hopes of becoming Nevada's first African American Senator, but his talent on the basketball court ultimately made the decision for his future. He played for the University of Portland, where he won the WCC Freshman of the Year award, and eventually transferred to the University of Nevada, Las Vegas where he won the 1990 NCAA Championship during his junior year. He was drafted to the New York Knicks in the first round of the 1991 NBA Draft, with the reputation of being a poor outside shooter but an excellent defender. He went on to have a lucrative career as a point guard throughout his NBA career before retiring in 2002. Upon retirement, he joined ESPN as an analyst for both NBA coverage on ESPN and ABC. In 2008, he made his debut as a college basketball analyst for CBS Sports, and in 2014 Anthony moved to the broadcast booth as a lead commentator. Anthony is still active in politics and is a registered Republican. He has three children, two with his ex-wife, Crystal McCrary Anthony, and one with his current wife, Chere Anthony.