What is Gilbert Arenas' Net Worth and Career Earnings?

Known as "Agent Zero," Arenas chose the number zero for his jersey, reportedly because his critics once said that he would play "zero minutes" in the NBA. His name is also a reference to his late-game shots, which often occur when the clock has reached "zero." Other nicknames include "Hibachi" and "Gilby."

Although Arenas became a three-time NBA All-Star and winner of the NBA Most Improved Player Award, his career was not free from controversy. A notable firearms incident saw him suspended for an entire season during 2010. After this incident, Gilbert only played a few more seasons in the NBA before playing for a final season in China. He retired at the end of 2013.

Gilbert Jay Arenas Jr. was born on January 6th of 1982 in Tampa, Florida. He subsequently relocated to Los Angeles with his family, where he attended high school and played basketball for the school team. After graduating, Arenas attended the University of Arizona and played for the school team for two years before declaring his eligibility for the NBA Draft.

Gilbert was picked 31st overall by the Golden State Warriors during the 2001 NBA Draft. He immediately made a strong impact, winning the NBA Most Improved Player Award during the 2002-2003 season. After this season, Arenas became a free agent and was signed by the Washington Wizards, who offered him a six-year, $60-million contract. During his time with the Wizards, Gilbert became known for his steals and strong technical abilities. He was also known for his late-game "buzzer-beater" shots. By this point, he was being regularly voted to the All-Star games.

In 2008, Arenas signed a new, six-year contract with the Wizards worth $111 million. However, his time with the Wizards would last just one more year before his firearms incident. The resulting season-long suspension impacted his career, and he spent the last years with the Orlando Magic, the Memphis Grizzlies, and the Shanghai Sharks.

During his career, Gilbert earned $160 million in salary plus tens of millions more from endorsements.

Gilbert has endorsed a number of brands over the course of his career, but his most notable partnership is perhaps Adidas. The sports brand gave Arenas his own shoe, called the Adidas Gil Zero. He later released his own line of Adidas TS Lightswitch shoes. However, his partnership with Adidas came to an end after his 2009 gun incident.

In 2014, it was reported that Arenas had sold a home in Great Falls, Virginia. He sold the home for $2.5 million after it had been on the market since 2012. He was forced to drop the price from an initial tag of $3.5 million, and he also chose to remove a literal shark tank that he had installed after buying the home for $2.875 million back in 2003. The residence sits on a plot of land that spans 1.2 acres, and it features a grotto, a bar, a pool area, and a large, black-crystal chandelier.

In 2015, it was reported that Gilbert had put another home on the market for $3.495 million. This was during the same time that he was filing a lawsuit against his financial advisor for mismanaging his money. Featuring Mediterranean style construction, the home features five bedrooms and 5,800 square feet of living space. Additional highlights include five fireplaces, a swimming pool, and a raised spa. He originally purchased this residence back in 2007 for $3.1 million, and it is located in Encino.

In 2016, Arenas successfully sold a third home, located in Calabasas. Located in a gated community, the residence sold for $3.35 million and sits atop a seven-acre plot of land situated on a hill. This Tuscan-style house offers exceptional panoramic views of the surrounding canyons and mountains. It also features 9,600 square feet of living space, seven bedrooms, a custom movie theater, and a hidden wine room. Outside, there is a saltwater swimming pool and a three-car garage. Gilbert successfully sold this home for $3.35 million, having originally purchased it back in 2014 for $2.75 million. 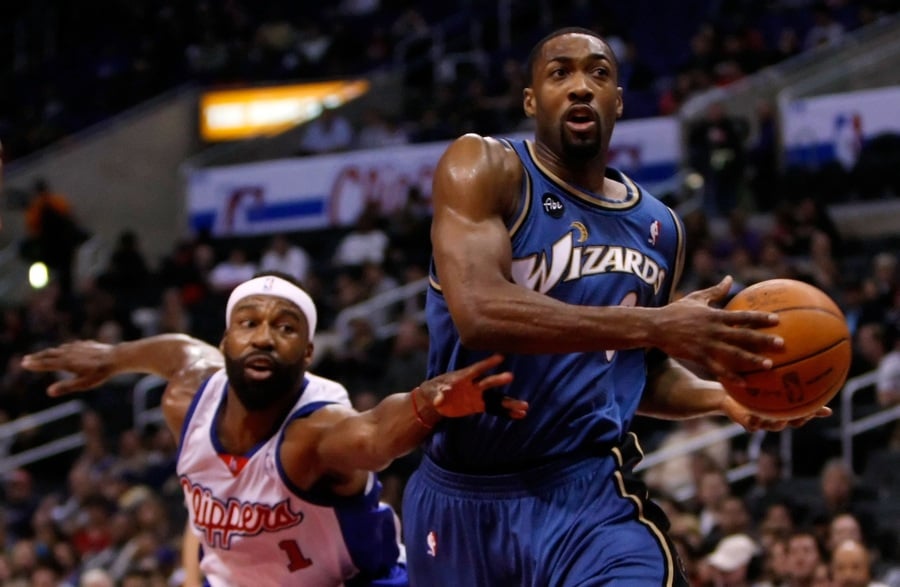 In recent years, Arenas has struggled financially and was even forced to sue a former financial advisor, seeking $40 million in damages. He had paid the company over $2 million in fees, but he claims that he actually lost significant amounts of money due to "absolute recklessness" on the part of his advisor. However, Arenas wasn't exactly conservative when it came to spending money, as he once famously spent $1 million on a birthday party for himself in 2007.

After a long relationship with public relations specialist Laura Govan, the pair eventually parted ways. They had four children together over the course of their relationship, which eventually resulted in Govan receiving $20,000 each month in child support (according to Arenas).

After Laura Govan appeared on an episode of "Basketball Wives LA," Gilbert sued her and the show's producers for trademark infringement, false advertising, and using his likeness without permission. He eventually dropped the lawsuit in 2012.

In 2009, Gilbert Arenas admitted that he had stowed unloaded firearms in his locker at the Verizon Center. He eventually gave the firearms to security teams at the stadium, but the damage was already done. By bringing firearms into the stadium, he violated both NBA rules and local D.C. laws. Another team member, Javaris Crittenton was also reported to have unloaded firearms in his locker. Inevitably, the DC Metropolitan Police launched an official investigation along with the US Attorney's office.

In 2010, Gilbert was charged with carrying a pistol without a license. He then pleaded guilty to the felony charge. The NBA soon suspended him indefinitely, and the Wizards issued a statement condemning his actions. Eventually, Arenas and Crittenton were suspended for the rest of the entire 2010 season. In terms of criminal consequences, Gilbert was sentenced to two years of probation and 30 days in a halfway house.