Gerald Wallace Net Worth: Gerald Wallace is an American professional basketball player who has a net worth of $28 million. Gerald Wallace was born in 1982 in Sylacauga, Alabama, and played college basketball close to home at the University of Alabama. He played with the Crimson Tide from 2000 until 2001 when the Sacramento Kings chose Wallace with the 25th overall pick during the first round of the NBA Draft.

Wallace had been named Alabama's Mr. Basketball prior to starting college and was the Naismith Prep Player of the Year. The six-foot-seven, 220-pound small forward played with the Kings until 2004 and later the Charlotte Bobcats from 2004 until 2011, the Portland Trail Blazers from 2011 until 2012, the New Jersey/Brooklyn Nets from 2012 until 2013, and the Boston Celtics from 2013 until present (fall of 2014). Wallace earned NBA All-Defensive First Team honors and was named an NBA All-Star in 2010. He led the league in steals four years earlier in 2006. Wallace has played in 32 postseason games with Sacramento, Charlotte, Portland, and Brooklyn, averaging 8.2 points per game overall. His current career regular season average is 12.4 points per game. Wallace is the founder of the Gerald Wallace Foundation, which works with underprivileged children and families in Childersburg, Alabama, and Portland, Oregon. 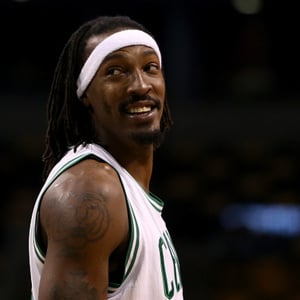