He was named to the All-Big East First Team and earned the Pete Newell Big Man Award. Okafor helped guide the Huskies to the 2004 NCAA Championship, where he was named NCAA Final Four Most Outstanding Player. The Charlotte Bobcats selected Okafor with the second overall pick of the 2004 NBA Draft. He won NBA Rookie of the Year honors in 2005 and was placed on the All-Rookie first team. Okafor played with the Bobcats from 2004 until 2009, the New Orleans Hornets from 2009 until 2012, and the Washington Wizards from 2012 until 2013. As of the fall of 2014, Okafor remains a free agent. He had one playoff appearance with the Hornets in 2011. He played for the U.S. men's national team, winning a bronze medal at the 2004 Olympic Games in Athens, Greece. Okafor covered the 2005 "NCAA March Madness" video game and appeared on "One Tree Hill". 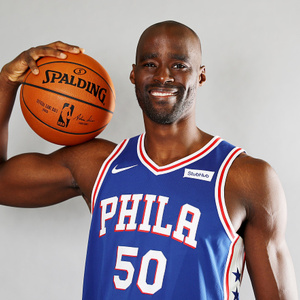