Elden Campbell Net Worth: Elden Campbell is a former American professional basketball player who has a net worth of $26 million. During his NBA career Elden earned around $70 million in salary alone.

Born in 1968 in Los Angeles, California, Elden Campbell played high school basketball near his hometown and went on to play college basketball at Clemson University across the country in South Carolina from 1986 until 1990. He earned first-team All-ACC honors in 1990 and averaged 15.3 points per game, 6.8 rebounds per game, and 2.7 blocks per game. The Los Angeles Lakers chose him in the first round of the 1990 NBA Draft with the 27th overall pick. He made his professional debut in Los Angeles on November 3, 1990, and Campbell played with the Lakers until 1999, the Charlotte/New Orleans Hornets until 2003, the Seattle SuperSonics in 2003, the Detroit Pistons until 2005, and later the New Jersey Nets and the Pistons once again, though both stints were short. He was part of the Pistons team that won the NBA Championship in 2004. Campbell finished his career with 10,805 points, 6,116 rebounds, and 1,602 blocks. He led the Lakers in scoring for the entire decade between 1990 and 1999. Campbell, who played at the power forward/center position, checked in at six-feet, eleven-inches tall and 279 pounds. 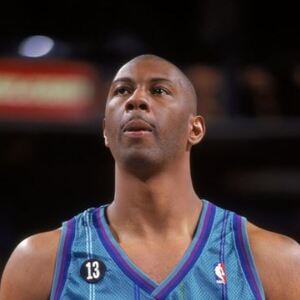