Eddie Jones net worth and salary: Eddie Jones is a retired American professional basketball player who has a net worth of $40 million. Jones was born on October 20, 1971 in Pompano Beach, Florida and was a shooting guard in the National Basketball Association. He is six feet and six inches tall and attended Temple University.

He made his NBA debut in 1994 with the Los Angeles Lakers and continued on to play with the Charlotte Hornets, Miami Heat, Memphis Grizzlies, Dallas Mavericks, and the Indiana Pacers. He is a three-time NBA All-star for the years 1997, 1998, and 2000. In his early career, Jones was on the NBA All-Rookie First Team and became the A-10 Conference Player of the Year during his reign at Temple University. He was also the receiver of the Robert V. Geasey Trophy winner. He was also selected for the All-NBA Third Team in 2000 and is a three-time player for the All-Defensive Second Team. In 2000 he was named the NBA steals leader and maintained a career record of 14,155 points; 3,857 rebounds; and 1,620 steals. In 1993, Jones competed in the FIBA U21 World Championship and received a gold medal. He retired after his contract with the Pacers ended in 2008 and is currently married to Trina Jones. 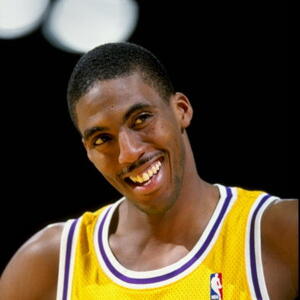