How much is Ed O'Bannon Worth?

Ed O'Bannon net worth: Ed O'Bannon is an American former professional basketball player who has a net worth of $100 thousand. Ed O'Bannon was born in Los Angeles, California in August 1972. He was a 6'8″ power forward who played at Artesia High School. O'Bannon helped lead his team to a California Interscholastic Federation Division II state championship and he also was named the MVP at the Dapper Dan Classic. O'Bannon had a remarkable college career playing at UCLA where he won an NCAA Championship in 1995 and was named the NCAA Final Four Most Outstanding Player. He was also named the USBWA College Player of the Year, Pac-10 co-Player of the Year, won the John R. Wooden Award, and was named a consensus first-team All-American in 1996. O'Bannon was named third-team All-American in 1994 and was a three time First-team All-Pac-10 selection. His #31 was retired by UCLA and he was elected to the UCLA Athletics Hall of Fame in 2005 and the Pac-12 Conference Hall of Honor in 2012. He was the #9 pick by the New Jersey Nets in the 1995 NBA Draft. O'Bannon player for the Nets from 1995 to 1997 and the Dallas Mavericks in 1997. He then played in the CBA, Italy, Spain, Greece, Argentina, the ABA, and Poland. He is the lead plaintiff in the O'Bannon vs. NCAA which is an antitrust class action lawsuit against the National Collegiate Athletic Association regarding the use of images of college athletes by the NCAA and whether the players should be compensated for their usage. O'Bannon won gold medals representing the US at the 1990 FIBA Americans U18 Championship and the 1993 Summer Universiade. 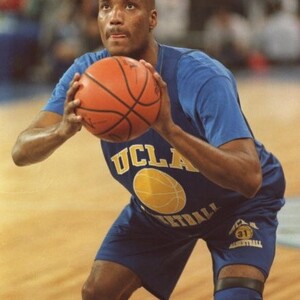