Earl Boykins net worth: Earl Boykins is an American former professional basketball player who has a net worth of $6 million. Earl Boykins was born in Cleveland, Ohio in June 1976. He was a 5'5″ point guard who played his college basketball at Eastern Michigan University where he was named the USA Basketball male Athlete of the Year in 1997 and the MAC Tournament MVP in 1998.

Boykins was a two time first-team All-MAC selection and an honorable mention All-American. In 1998 he was the Frances Pomeroy Naismith Award. Boykins was an undrafted NBA journeyman who played for 12 teams in 14 seasons. He started his professional career with the Rockford Lightning in the CBA. Boykins played for the New Jersey Nets, Cleveland Cavaliers, Orlando Magic, Cleveland, Los Angeles Clippers, Golden State Warriors, Denver Nuggets, Milwaukee Bucks, Charlotte Bobcats, Washington Wizards, Milwaukee, and the Houston Rockets. He also played for Virtus Bologna in Italy. He represented the United States and won a Gold medal at the 1997 Summer Universiade. Boykins signed a $3.5 million deal for one year in Italy. After retiring he became the head coach at Douglas County High School. 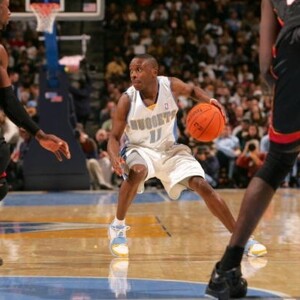