Drew Gooden Net Worth: Drew Gooden is a Finnish-American professional basketball player who has a net worth of $21 million. Drew Gooden was born in Oakland, California, in 1981, and attended a local California high school. He played college basketball at the NCAA powerhouse University of Kansas from 1999 until 2002. During his final college season, Gooden was a consensus first-team All-American and earned NABC Co-Player of the Year and Big 12 Player of the Year honors.

He covered EA Sports' NCAA March Madness video game in 2003. The Memphis Grizzlies drafted him with the fourth overall pick of the 2002 NBA Draft. Gooden played just one season with Memphis before landing with the Orlando Magic from 2003 until 2004. He was dealt a second time to the Cleveland Cavaliers, where he remained from 2004 until 2008. Gooden has since played with the Chicago Bulls, Sacramento Kings, San Antonio Spurs, Dallas Mavericks, Los Angeles Clippers, Milwaukee Bucks, and Washington Wizards. As of the fall of 2014, Gooden remains in D.C. He earned NBA All-Rookie first-team honors in 2003 and was part of the Cavaliers' 2007 Eastern Conference Championship. The six-foot-ten, 250-pound power forward/center intends to play internationally for Finland during the FIBA World Cup. He is the owner of a Florida Wingstop franchise. 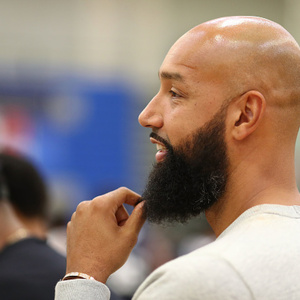