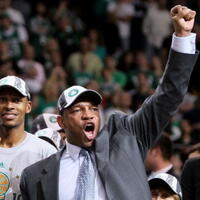 What is Doc Rivers' Net Worth and salary?

Doc Rivers is an American professional basketball coach and former player who has a net worth of $60 million. Doc played in the NBA from 1983 to 1996. He has been a coach since 1999. Doc Rivers coached the Los Angeles Clippers from 2013 to 2020 then moved over to the Philadelphia 76ers. His annual salary as an NBA head coach is $10 million.

During his playing career, he was a point guard known for his defense. Rivers has coached for the Philadelphia 76ers, Los Angeles Clippers, Orlando Magic, and the Boston Celtics, winning an NBA championship with the latter.

Doc Rivers was born as Glenn Anton Rivers in 1961 in Chicago, Illinois. As a teenager, he attended Proviso East High School, through which he competed in the McDonald's All-American Game. Later, in 1982, he played on the United States team in the FIBA World Championship, leading the team to a silver medal. For college, he went to Marquette University; following his third season there, he was drafted by the Atlanta Hawks in 1983. Over the next seven seasons, he served as a starter on the team, assisting star Dominique Wilkins. Following this, Rivers spent a year as a starter for the Los Angeles Clippers, and then two years with the New York Knicks. He concluded his playing career with the San Antonio Spurs, with which he played from 1994 to 1996.

In 1999, Rivers started his coaching career with the Orlando Magic; he would serve as coach of the team for over four NBA seasons. After his first year, in which he nearly brought the Magic to the playoffs, Rivers was honored with the 2000 Coach of the Year award. He made the postseason for the subsequent three years, but was ultimately fired in 2003 after a 1-10 start to the season.

Following a year doing sports commentary for ABC, Rivers was hired as the head coach of the Boston Celtics in 2004. Despite receiving much criticism for his coaching style during his first years with the team, Rivers eventually led the Celtics to great success. In early 2008, the team had the best winning percentage in the Eastern Conference. Moreover, after beating the New York Knicks 109-93, Rivers was given the opportunity to coach the East for the 2008 NBA All-Star Game. In June of 2008, Rivers won his first NBA Championship as a head coach, defeating the Los Angeles Lakers in six games. In 2010, Rivers led the Celtics once again to the NBA Finals against the Lakers, although this time they lost.

In 2011, after months of rumors speculating about Rivers' retirement, ESPN reported that he had signed a five-year contract extension with the Celtics. Two years later, in a game against the Toronto Raptors, Rivers earned his 400th win with the Celtics.

For the 2019-2020 season, Rivers notched his 900th win as a head coach after he led the Clippers to a home game victory over the Portland Trail Blazers. Later, the team made it to the Western Conference semifinals, and took a 3-1 lead before ultimately losing to the Denver Nuggets. As a result, Rivers became the first-ever NBA coach with three teams that failed to advance from a best-of-seven series with a 3-1 lead. In September of 2020, following another defeat by the Denver Nuggets, Rivers stepped down from coaching the Clippers. Although his record across seven seasons was 356-208, he was unable to lead the team to a conference finals appearance, which would have been a first for the franchise. 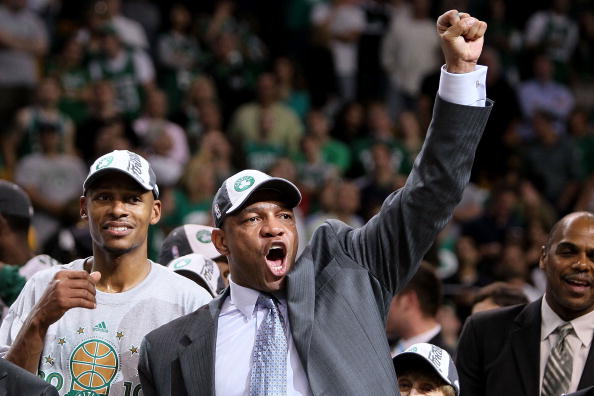 In October of 2020, Rivers was hired as the head coach for the Philadelphia 76ers. With the team, he notched his 945th career win, passing Bill Fitch to take 10th place on the all-time coaching regular season wins list. In addition, Rivers led the 76ers to a first seed placement in the Eastern Conference.

With his wife Kris, Rivers has three sons and a daughter. His eldest, Jeremiah, played basketball at Indiana University and Georgetown University, and was in the NBA D-League playing for the Maine Red Claws. Daughter Callie, meanwhile, played volleyball at the University of Florida, and is married to NBA star Seth Curry (Steph Curry's brother). Son Austin played for Duke University before being drafted by the New Orleans Hornets; he has also played for the Washington Wizards, Houston Rockets, New York Knicks, and Denver Nuggets, in addition to his time with the Los Angeles Clippers. Finally, youngest son Spencer played for Winter Park High School and the University of California, Irvine.

Rivers has other family members who have been prominent in professional sports. Among them are his uncle, Jim Brewer, who played for the Cleveland Cavaliers, Detroit Pistons, Portland Trail Blazers, and Los Angeles Lakers in the 70s and 80s. Rivers is also a cousin of former NBA guard Byron Irvin,  and a cousin of former MLB outfielder Ken Singleton.

In 2017 he paid $9.5 million for a beachfront Malibu home that was previously owned by Backstreet Boy Nick Carter. Doc listed the home for sale in July 2020 for a shade under $13 million.

Finally, according to public records, Doc also appears to maintain a 10,000 square-foot home in Orlando located in a gated lakefront community.