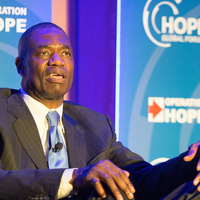 What is Dikembe Mutombo's Net Worth?

Dikembe Mutombo is a retired professional basketball player who has a net worth of $75 million. Dikembe Mutombo played for 18 seasons in the NBA. An eight-time All-Star, he is considered among the best shot blockers and defensive players in NBA history. Beyond basketball, Mutombo is highly regarded for his work in philanthropy.

During his playing career, Dikembe Mutombo earned over $140 million in salary before taxes. He earned tens of millions more from endorsements and continues to appear in national commercials decades into retirement.

Dikembe Mutombo was born on June 25, 1966 in Léopoldville, now called Kinshasa, in the Democratic Republic of the Congo. He is one of 10 children of Biamba and Samuel, and is a member of the Luba ethnic group. As a teen, Mutombo attended Boboto College, where he planned his studies with the intention of pursuing a medical career. When he was 16, he decided he was also interested in becoming a professional basketball player.

In 1987, Mutombo moved to the United States to enroll at Georgetown University on a USAID scholarship. Although he initially planned to become a doctor, he was recruited to play basketball by the school's coach John Thompson. Mutombo became an almost immediate success with the Georgetown Hoyas, establishing his reputation as a mighty shot blocker. In both 1990 and 1991, he was named Big East Defensive Player of the Year. Mutombo graduated from Georgetown in 1991 with degrees in diplomacy and linguistics.

Mutombo entered the NBA in 1991 when he was selected with the fourth overall pick by the Denver Nuggets. Once again, his shot-blocking skills made him an immediate success; he was named to the All-Star team his rookie year. By the 1993-94 season, Mutombo had become the lynchpin of the Nuggets, helping the team finish with a 42-40 record to qualify for the playoffs. He then helped the Nuggets win a huge playoff upset over the Seattle SuperSonics, during which he posted a record 31 blocks across the five-game series. However, the Nuggets ultimately fell to the Utah Jazz in the playoffs' second round. For the 1994-95 season, Mutombo was named to his second All-Star game, and was also named the NBA Defensive Player of the Year. He had his final season with the Nuggets in 1995-96, after which he became a free agent.

In 1996, Mutombo signed a five-year, $55 million free agent contract with the Atlanta Hawks. On the team, he continued his success, leading the Hawks to consecutive seasons of 50-plus wins. Moreover, he won two more Defensive Player of the Year honors. In his final season with the Hawks in 1999-00, Mutombo averaged 11.5 points and a league-high 14.1 rebounds per game. 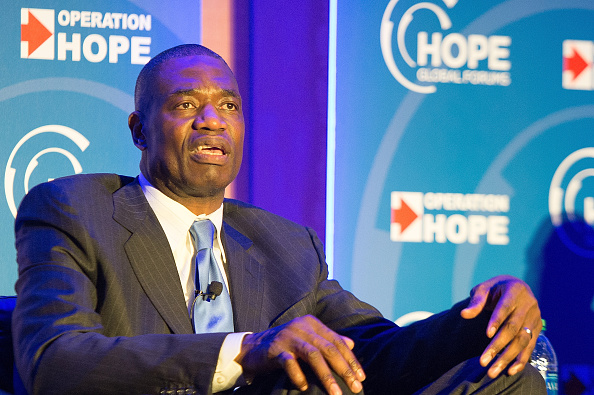 Mutombo was traded to the Philadelphia 76ers in February of 2001, and had perhaps his strongest professional season. He won his fourth Defensive Player of the Year honor, and helped the Sixers to the playoffs, where they defeated the Indiana Pacers, Toronto Raptors, and Milwaukee Bucks. The team advanced to the NBA Finals against the Los Angeles Lakers, and pulled off an upset to win Game 1. However, the Sixers were no match for the Lakers overall, losing the subsequent four games.

Although Mutombo was traded to the New Jersey Nets in 2002, he spent the majority of the season with an injury that limited his playing to only 24 games. In the Nets' run in the Finals, he served as a sixth man. Following the season, the team bought out the two remaining years on Mutombo's contract. He subsequently signed a two-year deal with the New York Knicks in 2003. In 2004, Mutombo was traded to the Chicago Bulls, which then traded him to the Houston Rockets just before the 2004-05 season.

With the Rockets, Mutombo partnered with fellow player Yao Ming to form one of the most productive center combos in the NBA. During the 2007-08 season, he recorded one of hist greatest streaks when he averaged double digits in rebounding as a starter after Yao suffered a broken bone. Mutombo went on to help the Rockets complete a 22-game winning streak, which was a team record at the time. In January of 2008, he surpassed Kareem Abdul-Jabbar to become the NBA player with the second-most career blocked shots. After considering retirement, Mutombo had his final professional season in 2009 as the oldest player in the league. He helped the Rockets make it to the playoffs, but suffered a knee injury in Game 2 that resulted in him being carried off the court. Mutombo announced his retirement shortly thereafter.

Beyond basketball, Mutombo is highly regarded for his humanitarian work. In 1997, he launched the Dikembe Mutombo Foundation to improve quality of life in the Democratic Republic of the Congo. Later, in 2004, he participated in the NBA's Basketball Without Borders program to help bolster infrastructure in Africa. Mutombo is also a longtime supporter of the Special Olympics, serving as a global ambassador and member of the international board of directors.

One of Mutombo's most notable humanitarian projects was the Biamba Marie Mutombo Hospital, which opened in 2007. The $29 million, 300-bed facility was the first modern medical facility to be built in the Kinshasa area in almost 40 years.

Mutombo is married to his wife Rose, who he met during a visit to his hometown of Kinshasa in 1995. The couple lives in Atlanta, Georgia, and has seven children.