What is Diana Taurasi's Net Worth and Salary?

Diana Taurasi is a professional basketball player and has a net worth of $3.5 million. Diana Taurasi has earned her net worth through her basketball career with the WNBA and for overseas teams such as UMMC Ekaterinburg of Russia.

In 2004 Taurasi was drafted by the Phoenix Mercury. In her rookie season The Phoenix Mercury won the WNBA title making Taurasi the seventh player ever to win the WNBA title, the NCAA title and the Olympic Gold Medal (representing the U.S. in the Women's National Basketball League). She has won several awards during her career, including NCAA Tournament MVP, WNBA Rookie of the year, WNBA Most Valuable Player, WNBA scoring champion and more.

From 2006 to 2010 Taurasi played for the European team Spartak Moscow which won four Euroleague championships in a row.

Diana Taurasi earns the WNBA's top salary which, as of this writing, is $221,000. When she plays overseas for teams in Russia, she can easily earn north of $1 million for a single season.

Taurasi attended Don Antonio Lugo High School where she played basketball. As a high school player, her skills were widely recognized. She was the recipient of the Cheryl Miller Award in 2000 and was also named the "Parade Magazine" National High School Player of the Year in 2000. She was named the MVP in the WBCA High School All-America Game and ranked fourth in California state history in terms of overall scoring.

After high school, Taurasi enrolled at the University of Connecticut and led the team to three consecutive NCAA championships. While there, Taurasi received many awards and accolades. She was the recipient of the 2003 and 2004 Honda Sports Award and was named the 2003 Associated Press Player of the Year. She was also highly regarded by the state of Connecticut and skills were recognized by state senator, Thomas Gaffey.

After completing her college career, Taurasi was selected first overall in the 2004 WNBA Draft by the Phoenix Mercury. The previous year, the team had a losing record of 8-26. In her debut game, Taurasi scored 22 points and then went on to average 17 points for the season. Though the Mercury did not qualify for the playoffs that season, Taurasi was named to the Western Conference All Star team and won the WNBA Rookie of the Year Award.

The following season, she averaged 16 points per game while also battling an ankle injury. She was named an All Star but the Mercury again failed to make the play-offs. Prior to the next season, NBA coach Paul Westhead became the Mercury's new coach. The team also added another star rookie to the roster – Cappie Pondexter. In addition to Taurasi and other star player, Penny Taylor, the Mercury were projected to do well in the upcoming season.

Indeed, the 2006 season was a historic one for Taurasi, who flourished under Westhead's coaching. She led the league in scoring and broke a league record for points in a single season. She averaged over 25 points per game and also secured her career high game at 47 points in a triple overtime game against the Houston Comets. She also set a WNBA record by making 121 three-pointers in a single season. However, the Mercury still missed the playoffs. 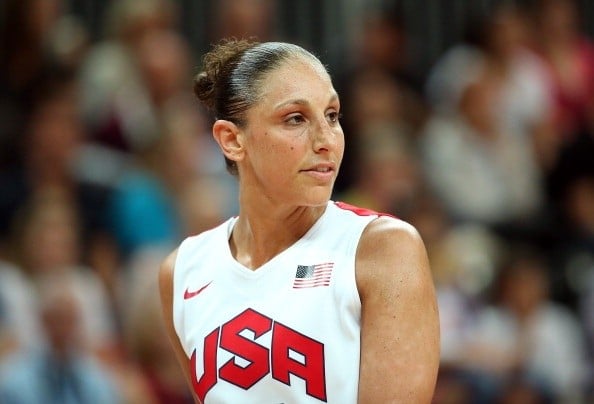 The following season, in 2007, the Mercury finally made it to the WNBA playoffs and even advanced to the Finals, meeting the defending champions, the Detroit Shock. Taurasi, along with Taylor and Pondexter, led the team to victory. The Mercury returned to the finals in 2009, where they again won and Taurasi was named the WNBA Finals MVP. She became one of only two players to win a season scoring title, the season MVP award, a WNBA Championship, and the finals MVP in the same season.

Taurasi has remained with the Mercury for her entire WNBA career, though she has occasionally suffered injuries that reduced her playing ability. In 2012, she suffered a number of injuries that left her only able to play eight games. She then had to sit out the rest of the season due to a strained hip flexor. That season, the Mercury were the second worst team in the league with a 7-27 record. However, she returned to the court in 2013 and led the team to the playoffs. In May of 2017, she signed a multi-year contract extension with the Mercury. The same month, she became the first player in league history to reach 7,000 points, 1,500 rebounds, and 1,500 assists and then became the league's all-time leading scorer in June of that year.

Outside of her career with the WNBA, Taurasi also competed on behalf of the United States on the Women's Olympics Basketball Teams in the 2004, 2008, 2012, and 2016 Olympics. In all four games, she helped the team win the gold medal.

Taurasi has also had a successful career oversees, typically playing Russian and Turkish teams. Given the alternate schedule of the European leagues, she was usually able to manage playing both in the U.S. and in Europe. However, in 2015, the UMMC Ekaterinburg team from Russia paid Taurasi to sit out her WNBA season in order to rest in hopes that she would help them secure a championship in Europe. Taurasi ultimately retired from European competition in 2017.

After eight years of dating, Taurasi married Penny Taylor. The two had formerly been teammates before Taylor became the Phoenix Mercury Director of Player Development and Performance. They married on May 13, 2017 and discussed their happiness in a later interview with "People" magazine. In March of 2018, Taylor gave birth to the couple's son, Leo Michael Taurasi-Taylor.

In October of 2021, Taylor was due to give birth to the couple's second child, a daughter. However, the baby was late and Taurasi was forced to leave to play a winner-takes-all Game 5 that would determine whether her team would advance to the 2021 WNBA finals. After winning the game, Taurasi rushed back to Taylor and arrived in time to witness the birth of the couple's first daughter.