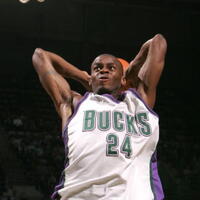 Desmond Mason net worth: Desmond Mason is an American artist and former professional basketball player who has a net worth of $13 million. Desmond Mason was born in Waxahachie, Texas in October 1977. Mason was a 6'5″ shooting guard and small forward who played at Waxahachie High School. He played his college basketball at Oklahoma State University. Mason was drafted #17 by the Seattle SuperSonics in the 2000 NBA Draft. He played for Seattle from 2000 to 2003 and then was traded to the Milwaukee Bucks where he played from 2003 to 2005. Mason was traded to the New Orleans Hornets where he played from 2005 to 2007. He played for the Bucks again from 2007 to 2008 and then was traded to the Oklahoma City Thunder where he played from 2008 to 2009. Mason finished his career with the Sacramento Kings in 2009. In 2001 he won the NBA Slam Dunk Contest. He now works as an NBA Analyst for and sports radio host for Oklahoma City sports talk station The Franchise. As an artist he works with oil paint, acrylic paint, ceramics, and watercolors. He founded the Desmond Mason Art Show in 2004.