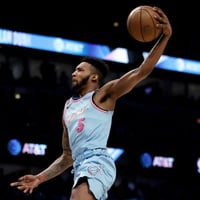 Derrick Jones Jr. was born in Chester, Pennsylvania in February 1997. He is a 6'6″ small forward. Jones Jr. played for Archbishop John Carroll High School where he was the Southeastern Pennsylvania Player of the Year and the Delaware County Player of the Year as well as Mr. Pennsylvania Basketball in 2015. Derrick Jones Jr. played his college basketball for UNLV. He went undrafted but signed with the Phoenix Suns where he played from 2016 to 2017. During that time he also played for the Northern Arizona Suns of the G League. Jones Jr. joined the Miami Heat in 2017 and played for the Sioux Falls Skyforce of the G League. In 2020 he won the NBA Slam Dunk Contest. During his first four NBA seasons he average 5.8 points per game and 3.2 rebounds per game.