What is Derek Fisher's Net Worth and Salary?

Derek Fisher is a retired NBA player who eventually became a team head coach and general manager. Derek Fisher has a net worth of $45 million. Over his 18-year professional playing career, he won five NBA championships with the Los Angeles Lakers, and also played for teams including the Golden State Warriors and Oklahoma City Thunder. Until 2020, Fisher held the record for the most playoff game appearances by an NBA player.

Derek Fisher was born in 1974 in Little Rock, Arkansas. He has an older brother named Duane, who also went on to play in the NBA. As a teen, Fisher went to Parkview Arts and Science Magnet High School, where he played basketball. After graduating, he enrolled at the University of Arkansas at Little Rock as a communications major. Over his collegiate basketball career at Arkansas, he averaged 12.4 points and 4.4 rebounds across 112 games. Fisher also led the team in steals and assists every year, and won Sunbelt Conference Player of the Year as a senior. He finished his career with school-best records of 1,393 points, 472 assists, and 189 steals.

In the 1996 NBA draft, Fisher was selected 24th overall by the Los Angeles Lakers. He made his NBA debut in a game against the Phoenix Suns, in which he recorded 12 points and five assists. He went on to appear in 79 more games throughout his rookie season, averaging 3.9 points and 1.5 assists. During his second season, he and the Lakers advanced to the Western Conference Finals, but ultimately lost in four games to the Utah Jazz. In 1998-99, a lockout-shortened season, he posted averages of 9.8 points and 4.9 assists per game. Fisher had his most successful season yet in 1999-2000, winning his first NBA championship with a victory over the Indiana Pacers. Although he missed the first 62 games of the 2000-01 season due to a foot injury, Fisher came roaring back to start the Lakers' final 20 games. The team concluded the season with an eight-game winning streak, and went on to sweep through the Western Conference. In the Finals, the Lakers beat the Philadelphia 76ers in five games, giving Fisher his second consecutive championship title. A third consecutive title came the next season in a win over the New Jersey Nets.

Although Fisher's success had made him the primary point guard of the Lakers, the team was eliminated in the Western Conference Semifinals in 2003, demoting Fisher back to the bench the following season. However, in Game 5 of the 2004 Western Conference Semifinals, Fisher had one of his greatest playoff moments ever. With the San Antonio Spurs up 73-72 with 0.4 seconds on the clock, Fisher made a buzzer-beating basket to give the Lakers the win. The team went on to defeat the Minnesota Timberwolves at the Western Conference Finals, but lost the NBA Finals to the Detroit Pistons. 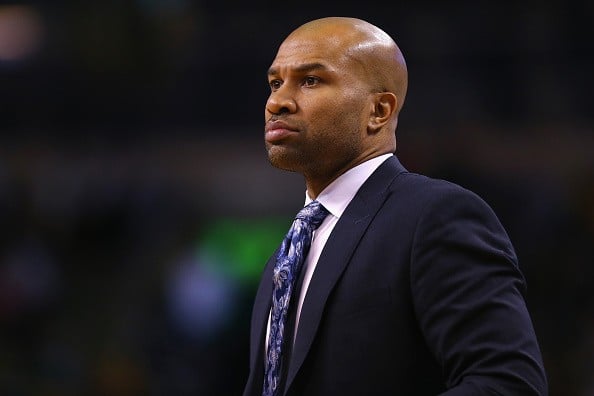 In 2004, Fisher signed a six-year contract with the Golden State Warriors worth $37 million. His time with the team was mostly disappointing, as the Warriors struggled to climb up from the bottom of the Western Conference standings. Still, in the 2005-06 season, Fisher managed to post the highest season-scoring average of his career, with 13.3 points per game.

Fisher was traded to the Utah Jazz in 2006. He appeared in all 82 games of the season, and averaged 10.1 points per game. In the 2007 playoffs in Salt Lake City, Fisher had to miss part of Game 2 due to his infant daughter's emergency surgery in New York. Landing in Utah while the game was in progress, Fisher came in to play in the middle of the third quarter. With only minutes left on the clock, he made a three-pointer to give the Jazz the victory. Later, in the Western Conference Finals, the team fell to the San Antonio Spurs.

Return to the Lakers

In 2007, Fisher officially returned to the Los Angeles Lakers. He resumed his role as starting point guard in a strong season that ended with an NBA Finals appearance; ultimately, the Lakers lost to the Boston Celtics. The team made it to the Finals again the next season, this time beating the Orlando Magic in four games. Another Finals appearance came in 2010 against the Boston Celtics; thanks to a critical three-pointer from Fisher, the Lakers came back from a 13-point third-quarter deficit and went on to win 83-79 for Fisher's fifth NBA championship title.

Fisher was traded to the Houston Rockets in 2012. After he negotiated a contract buyout with the franchise, he was waived without playing a game. Subsequently, Fisher signed with the Oklahoma City Thunder for the remainder of the season. With the Thunder, he made his eighth NBA Finals appearance, ultimately losing to the Miami Heat. Following this, Fisher signed with the Dallas Mavericks; however, after suffering a knee injury, he requested to be released. In February of 2013, Fisher re-signed with the Thunder, and re-signed again that July. He helped the team reach the Western Conference Finals, which was ultimately won by the Spurs.

In 2014, Fisher was hired to be the head coach of the New York Knicks. His first season was a disappointment, as the Knicks finished with a franchise-worst record of 17-65. Fisher was later fired in early 2016 after the team fell to another abysmal record.

Fisher has had better success as the head coach of the WNBA's Los Angeles Sparks, a position he began in late 2018. In his first season, the team finished with a 22-12 record and a semifinals appearance. In his second, shortened season, the team posted a 15-7 record. Fisher was later appointed general manager of the Sparks in 2020.

In 2005, Fisher wed his wife Candace, with whom he has four children: Marshall, Chloe, and twins Tatum and Drew. The pair divorced in 2016. Later, in 2018, Fisher got engaged to Gloria Govan, the ex-wife of his former teammate Matt Barnes.

In November 2020 Derek placed his Tarzana, California home on the market for $2.5 million. A month later the home sold for $2.31 million.