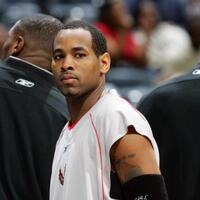 Derek Anderson Net Worth: Derek Anderson is a former American professional basketball player who has a net worth of $24 million. Born in Louisville, Kentucky, in 1974, Derek Anderson played college basketball first at Ohio State University from 1992 until 1994 and later at the University of Kentucky from 1995 until 1997. He won the 1996 NCAA men's national championship with the Wildcats. The Cleveland Cavaliers chose him with the 13th overall pick during the first round of the 1997 NBA Draft. He played for the Cavs until 1999 before joining the Los Angeles Clippers until 2000, the San Antonio Spurs until 2001, the Portland Trail Blazers until 2005, the Houston Rockets until 2006, the Miami Heat briefly in 2006, and the Charlotte Bobcats until 2008. The career journeyman was a member of the 1998 NBA All-Rookie second team and was part of the 2006 Miami Heat NBA Championship team. He appeared in eight postseason games for the Heat during their title run. Anderson finished his professional career with 7,357 points, 1,988 rebounds, and 2,083 assists. He has not played since the conclusion of the 2008 season with the Bobcats when he appeared in 28 regular season games, averaging five points, 1.9 rebounds, and 1.6 assists per game.