DeMarcus Cousins net worth and salary: DeMarcus Cousins is an American professional basketball player who has a net worth of $37 million. DeMarcus was drafted into the NBA in 2010 and proceeded to earn right around $90 million in salary alone during his first decade in the league.

DeMarcus Cousins was born in Mobile, Alabama in August 1990. Cousins is a 6'11" center who played at LeFlore Magnet High School. He played in the 2009 McDonald's All-American Boys Game and 2009 Nike Hoop Summit and led his team to the state championship game. Cousins played his college basketball at the University of Kentucky. In 2010 he was a Consensus second-team All-American, first-team All-SEC, SEC Rookie of the Year, and named to the SEC All-Rookie Team and SEC All-Tournament Team. Cousins was drafted #5 by the Sacramento Kings in the 2010 NBA Draft. He played for the Kings through the 2016 season before moving the the Pelicans for two seasons. He moved over to the Golden State Warriors ahead of the 2018 season.

Contracts: His rookie contract in 2010 was worth around $7 million. In 2013 he signed a four year extension worth $62 million and announced he would donate $1 million to the families and community of Sacramento. In 2011 he was named to the NBA All-Rookie First Team and in 2015 he was selected as an NBA All-Star. Cousins won a Gold medal representing the United States at the 2014 FIBA Basketball World Cup in Spain.

DeMarcus Cousins Salary Highlights: Going into the 2019 season, DeMarcus' career earnings sat just under $80 million (from NBA salary alone). His salary per year at this point topped $18 million. Between June 2018 and June 2019, DeMarcus earned $45 million from salary and endorsements. That was enough to make him one of the highest-paid athletes on the planet.

Real Estate: In October 2017, DeMarcus paid $6.5 million for an incredible 2-acre estate in Las Vegas. The home, which is more like a luxury resort, has 10 bedrooms, 12 bathrooms and encompasses 20,000 square-feet. He listed the home for sale in September 2020 for $8 million. Here's an incredible video tour of the home: 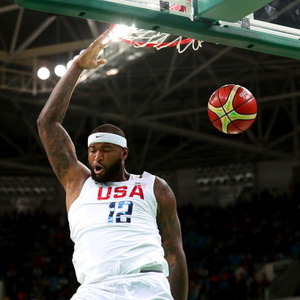