What is DeMar DeRozan's Net Worth and Salary?

DeMar DeRozan is an American professional basketball player who has a net worth of $80 million dollars. DeMar plays in the NBA for the Chicago Bulls. Before this, he played for the Toronto Raptors for nine seasons and the San Antonio Spurs for three. On the international stage, DeRozan has played for the United States national team in the 2014 FIBA World Cup and the 2016 Summer Olympics in Rio de Janeiro, winning gold in both.

He played college basketball for the University of South California where he made the Pac-10 All-Freshman Team and was named Pac-10 Tournament MVP in 2009. DeRozan was drafted #9 by the Toronto Raptors in the 2009 NBA Draft and has played his entire career for Toronto. In 2014, 2016, 2017 and 2018, he was named as an NBA All-Star.

Through his first 10 season in the NBA, DeMar earned $176 million in salary alone.

DeMar DeRozan was born on August 7, 1989 in Compton, California to Frank and Diane. As a teen, he went to Compton High School, where he was ranked from his class as one of the top college recruits in the country. In his senior year, DeRozan led his school to a 26-6 record, a Moore League championship, and the CIF Division IAA Southern Section quarterfinals. He was consequently named the Moore League MVP and was named to the California All-State team. Additionally, DeRozan was a member of the McDonald's All-American team in 2008.

For college, DeRozan went to USC, where he played basketball with the Trojans as a freshman. In his first game, he scored a team-high 21 points and seven rebounds. DeRozan and the Trojans went on to make it to the Pac-10 Tournament final, where they defeated Arizona State 61-49. In recognition of his performance, DeRozan earned first-team Pac-10 All-Freshman honors. The Trojans subsequently made it to the 2009 NCAA Men's Division I Basketball Tournament, ultimately falling to Michigan State in the second round. During his first and only year at USC, DeRozan started all 35 season games, and followed up the regular season by averaging 19.8 points in five postseason games. His total of 485 points ranks third among all USC freshmen.

In 2009, DeRozan decided to forgo his next three years of USC eligibility to enter the NBA draft; he was ultimately selected by the Toronto Raptors. He had one of the best games of his early professional career on New Year's Eve in 2010, when he scored a then-career high of 37 points against the Houston Rockets. DeRozan went on to match that high in November of 2012 and November of 2013. In January of 2014, he bested the number with 40 points against the Dallas Mavericks; moreover, he was selected to the NBA All-Star Game. More success came in March, when DeRozan led the Raptors to their first playoff appearance in six years. Overall, the 2013-14 season marked DeRozan's breakthrough as a Raptor, as he averaged career highs of 22.7 points, 4.3 rebounds, and 4 assists, and led the Raptors to a third-seed finish in the Eastern Conference. During the 2014-15 season, DeRozan scored a new career high of 42 points.

DeRozan continued his success with the Raptors in the 2015-16 season, helping the team achieve a franchise-record 11-game winning streak. He also became the winningest player in franchise history with his 233rd career win. Moving on to the playoffs, DeRozan helped the Raptors win a best-of-seven series for the first time in the team's history. They went on to advance to the conference finals, also a first for the team. Ultimately, the Raptors fell to the Cleveland Cavaliers. 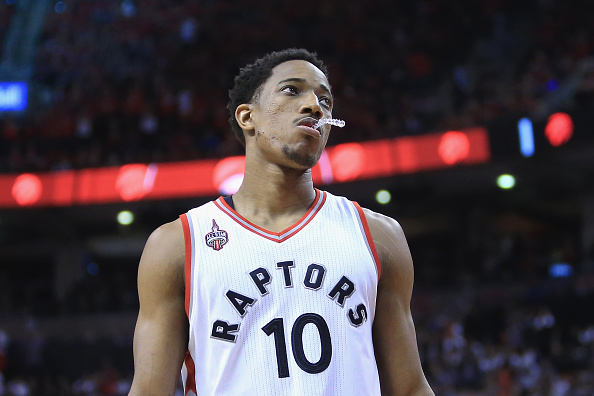 In the summer of 2016, DeRozan re-signed with the Raptors to a $139 million, five-year contract. He continued his strong performance in the 2016-17 season, setting or matching many records and becoming the Raptors' all-time scoring leader. DeRozan finished the season with a career high of 2,020 points. The next season, his last with Toronto, he set a new career high of 45 points in a 114-109 victory over the Philadelphia 76ers. DeRozan bested this a little later with a franchise record of 52 points in a 131-127 overtime win against the Milwaukee Bucks. The Raptors went on to the first round of the playoffs, where they took a 2-0 lead over the Washington Wizards en route to a win. However, the team was swept by the Cavaliers in the second round.

DeRozan was traded to the San Antonio Spurs in the summer of 2018. During his three seasons with the team, he posted a number of records; among them, he was the first Spurs player to record a triple-double at home since Tim Duncan in 2003.

In 2021, DeRozan was traded to the Chicago Bulls. Notably, with the team, he became the first player in the history of the NBA to make game-winning buzzer beaters on consecutive days. In January of 2022, DeRozan was selected to his fifth NBA All-Star Game.

On the world stage, DeRozan played with the United States national team in the 2014 FIBA Basketball World Cup, winning the gold medal. His next appearance with the US team came in 2016 at the Summer Olympics in Rio de Janeiro, where he once again helped lead the team to a gold medal.

With his wife Kiara Morrison, DeRozan has two daughters named Diar and Mari.

DeRozan has been a notable advocate for health issues. Due to his depression, he has worked to help spread awareness of mental health, even prompting the NBA to add a new rule requiring each team to have at least one full-time, licensed mental health professional on staff. Additionally, DeRozan has partnered with Lupus Canada to raise awareness of lupus, which his mother has. 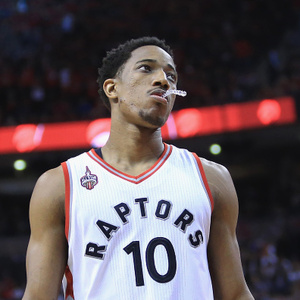