DeAndre Jordan Net Worth and salary: DeAndre Jordan is an American professional basketball player who has a net worth of $80 million. DeAndre Jordan was born in Houston, Texas in July 1988. Jordan is a 6'11" center who played high school basketball at Christian Life Center Academy. He was a Parade All-American and a two time all-state selection. He played for Team USA at the 2007 Under 19 World Championships and won a silver medal. Jordan played his college ball for Texas A&M. In 2008 he was named to the Big-12 All-Rookie Team. After one season in college he declared for the NBA Draft. DeAndre was drafted #35 by the Los Angeles Clippers in the 2008 NBA Draft. He started his first game in the NBA in January 2009 where he had 8 points, 10 rebounds, and 6 blocks. In 2011 Jordan signed a deal worth $43 million for four years with the Clippers. In the summer of 2019 he singed a $40 million deal with the Brooklyn Nets. He led the NBA in rebounds for the 2013-14 season with 13.6 per game. In April 2014 he became the first player with at least 25 points, 18 rebounds, and 5 blocks in a playoff game since 2008 when Tim Duncan recorded the accomplishment. Between June 2017 and June 2018, DeAndre earned $24 million. As of February 2020 he has earned $130 million in salary alone from the NBA.

Real Estate: In 2015, DeAndre paid $12.7 million for a newly built mansion in LA's Pacific Palisades neighborhood. For some reason he dumped this house after a year, taking a $1 million loss. In 2016 he paid $5 million for a home in the Serra Retreat neighborhood of Malibu. On one day in May 2019 DeAndre did two things: 1) He paid $10 million for an incredible mansion in Malibu and 2) he sold the Serra Retreat home for $5.7 million. In February 2020 he listed his latest Malibu mansion for $9.95 million, $50k LESS than he paid for it less than a year earlier. 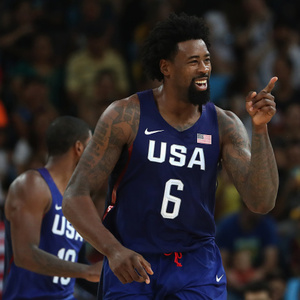