Deandre Ayton net worth and salary: Deandre Ayton is a Bahamian professional basketball player who has a net worth of $5 million. Deandre Ayton was born in Nassau, Bahamas in July 1998. He is a 7'1″ center and power forward. Ayton played high school basketball at Balboa City School and Hillcrest Prep Academy.

He played college basketball at Arizona from 2017 to 2018. Deandre Ayton was a McDonald's All-American and Jordan Brand Classic in 2017. In 2018 he was a consensus first-team All-American and won the Karl Malone Award and was the Pac-12 Player of the Year. He was first-team All-Pac-12 and the Pac-12 Tournament MOP and the Pac-12 Freshman of the Year. Ayton was drafted #1 overall by the Phoenix Suns in the 2018 NBA Draft. If he manages to make it to a fourth year with the Suns, he will be the first rookie to make $40 million in four years. The first two years are fully guaranteed the second two years are not. During his only year at Arizona he averaged 20.1 points per game and 11.6 rebounds per game. He signed a sponsorship deal with Puma in 2018. 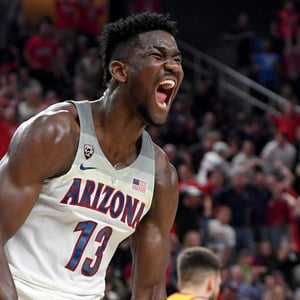