De'Aaron Fox net worth: De'Aaron Fox is an American professional basketball player who has a net worth of $20 million. He is best known for playing for the Sacramento Kings.

De'Aaron Fox was born in New Orleans, Louisiana in December 1997. He is a 6'3″ point guard who played at Cypress Lakes High School. Fox played in the Jordan Brand Classic where he was Co-MVP and in the Nike Hoop Summit in 2016. He was named a McDonald's All-American in 2016. De'Aaron Fox played his college basketball for Kentucky where he was first-team All-SEC, SEC All-Freshman Team, and SEC Tournament MVP in 2017. He was drafted #5 overall by the Sacramento Kings in the 2017 NBA Draft. Over his first three NBA seasons De'Aaron Fox averaged 16.2 points per game, 6.1 assists per game, and 3.4 rebounds per game. He scored a career high 39 points in 2020 during the first game in the Orlando bubble.

Contracts and Earnings: In his first three seasons in the NBA, De'Aaron Fox earned $16 million in salary alone. In November 2020 he signed a five-year max contract extension worth $163 million. 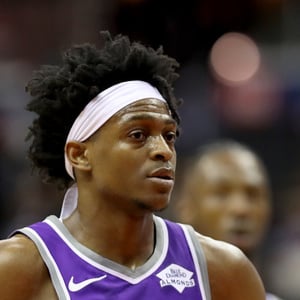