David Thompson net worth, salary and career earnings: David Thompson is an American former professional basketball player who has a net worth of $1 million. David Thompson was born in Shelby, North Carolina in July 1954. He was a 6'4″ shooting guard and small forward who played at Crest High School. David Thompson played his college basketball at NC State and his #44 was retired. He won the NCAA championship in 1974 and was named NCAA Final Four Most Outstanding Player. He was also named college national player of the year in 1975 and was a three time ACC Player of the Year and consensus first-team All-American. Thompson was drafted #1 overall by the Atlanta Hawks in the 1975 NBA Draft and was also #1 in the ABA draft. He signed with the Denver Nuggets and played from 1975 to 1982 before playing for the Seattle SuperSonics from 1982 to 1984. Thompson was the ABA Rookie of the Year, an ABA All-Star, the ABA All-Star Game MVP, and made the ABA All-Time Team. He was the NBA All-Star Game MVP and a four time All-Star and was two time All-NBA First Team. David Thompson was inducted into the Basketball Hall of Fame and the College Basketball Hall of Fame. David struggled with drugs and alcohol later in life but eventually got clean. Michael Jordan asked David Thompson to introduce him for him his NBA Hall of Fame induction.

Record Breaking Contract: In 1978 David signed what was then a record-breaking contract for the NBA. It was a three-year $4 million deal, which is the equivalent of $15 million in today's dollars. 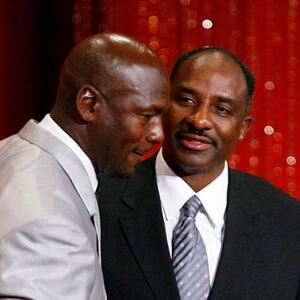