David Lee Net Worth and Salary: David Lee is a retired American professional basketball player who has a net worth of $40 million. David Lee was born in St. Louis, Missouri in April 1983. Lee is a 6'9″ power forward/center. While playing at Chaminade College Preparatory School Lee was a McDonald's All American and won the Slam Dunk contest in 2001. He was also a first-team high school All-American as named by Parade magazine and was named Mr. Show-Me Basketball in 2001. Lee attended the University of Florida where he was part of the All-Southeastern Conference freshman team and a second-team All-SEC selection. With Florida Lee won the 2005 SEC Men's Basketball Tournament. He was drafted #30 by the New York Knicks in the 2005 NBA Draft. He played for the Knicks from 2005 to 2010 and was named the NBA Rookie Challenge MVP in 2007. In 2010 Lee signed with the Golden State Warriors and has played there ever since. He signed a six year deal with Golden State worth $79.54 million. Lee was named to the All-NBA Third Team in 2013 and is a two time NBA All-Star. David retired from the NBA after the 2016-2017 season.

Career earnings: In total during his career he made just under $98 million in salary alone. His peak earning season was 2015-2016 when he earned $15.4 million playing for the Celtics.

Real Estate: In 2017 David bought a condominium in West Hollywood, California for $13.5 million. He actually combined three units to create a 5,500 square foot single apartment that takes up roughly half of a floor. He sold the condo in May 2019 for $11 million, a $3 million loss.

In 2018, Caroline and David paid $13.5 million for a condo on Fisher Island in Miami. They sold the condo, which is located on an exclusive island accessible only by ferry, boat or helicopter, in February 2021 for $16.25 million. Monthly HOA dues for the condo come to $10,000. 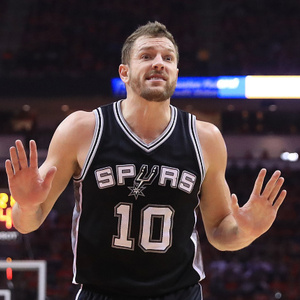