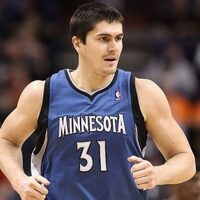 Darko Milicic Net Worth: Darko Milicic is a former Serbian professional basketball player who has a net worth of $25 million. Born in Novi Sad, Serbia, Yugoslavia, in 1985, Darko Milicic began his pro playing career with Hemofarm in his native Serbia in 2001. The Detroit Pistons drafted Milicic with the second overall pick during the first round of the 2003 NBA Draft; he went on to play in the Motor City for three seasons until 2006. Milicic would later play with the Orlando Magic from 2006 until 2007, the Memphis Grizzlies from 2007 until 2009, the New York Knicks from 2009 until 2010, the Minnesota Timberwolves from 2010 until 2012, and, lastly, the Boston Celtics, also in 2012. Milicic was part of the Pistons' NBA Championship-winning team during the 2004 season. He competed internationally as part of the Yugoslavian men's national team and won a gold medal at the U-16 European Championship in Latvia in 2001. He has worn the numbers 13, 31, and 99 during his pro career. The seven-foot, 275-pound center plans to fulfill his military commitment to his home country. He is an active philanthropist. Milicic has been married to his longtime girlfriend, Zorana Markus, since 2009. She gave birth to the couple's first son a few months after their wedding.