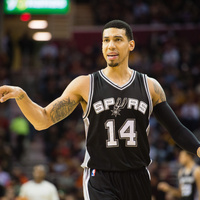 Danny Green net worth and salary: Danny Green is an American professional basketball player who has a net worth of $12 million dollars. Danny Green was born in North Babylon, New York, and graduated from the University of North Carolina. While at North Carolina, he played basketball for all four years, and chose to complete his senior year at the school, even though he was eligible for the NBA draft. His senior year he was an ACC All-Defensive selection. He was signed by the Cleveland Cavaliers in 2009, and was waived after 20 games. He then signed with the San Antonio Spurs, who waived him after two games. He spent the next few months playing in the NBA Development League, first with the Reno Bighorns and then with the Austin Toros. He then spent a few months playing for KK Union Olimpija during the NBA lockout. When he returned to the Spurs, his game had improved immensely. He hit his stride during the 2012-2013 season with the Spurs, and broke the record for the most three-pointers made during the NBA Finals with 27.