Danny Granger net worth: Danny Granger is an American basketball player who has a net worth of $20 Million. Currently he plays at the forward position for the Indiana Pacers. Danny Granger was born on April 20, 1983 in New Orleans, Louisiana. He started his collegiate career at the University of Bradley from 2001-03, but transferred to the University of New Mexico after a subpar sophomore season.

In 2004-05, he became the first player in New Mexico school history to record 60 assists, 60 steals and 60 blocks in a season, winning the Mountain West Conference MVP and leading the Lobos to the NCAA tournament along the way. After graduating, Danny Granger was selected by the Indiana Pacers with the 17th pick of the 2005 NBA Draft. He made the NBA All-Rookie Second Team in 2006, and was named both an NBA All-Star in 2009 and the NBA's Most Improved Player in 2009. He averaged over six more points than the previous year, and posted career highs in scoring, three points and free throw percentages. In the summer of 2010, Granger played for the US Senior National team in the 2010 FIBA World Championships, and helped win a gold medal for the team. In the 2012-13 season, Granger played in just five games due to patellar tendinosis. 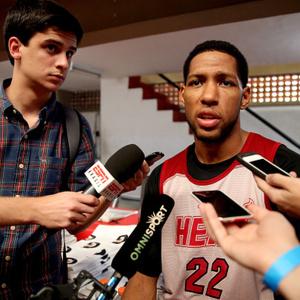