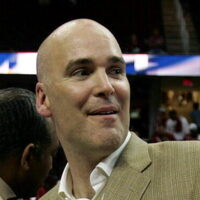 Danny Ferry Net Worth: Danny Ferry is a retired American professional basketball player and current NBA general manager who has a net worth of $17 million. During a 17-year NBA career Danny earned $44 million salary alone. His largest contract was a 10-year, $34 million deal signed in 1990 with the Cavaliers.

Born in Hyattsville, Maryland, in 1966, Danny Ferry played college basketball for Duke University from 1985 until 1989, where he earned several awards, including Naismith College Player of the Year in 1989. Ferry was twice named ACC Player and ACC Athlete of the Year between 1988 and 1989. The Los Angeles Clippers drafted Ferry with the second overall pick during the first round of the 1989 NBA Draft. He made his pro debut with Italy's Il Messaggero Roma from 1989 until 1990 before joining the Cleveland Cavaliers to make his pro debut in 1990. He went on to play with the Cavs for the next decade. From 2000 to 2003, Ferry played for the San Antonio Spurs, and won a 2003 NBA Championship with the team. He finished his pro playing career with 6,439 points to go along with 2,550 rebounds and 1,185 assists.

Ferry played internationally with the United States' men's national basketball team, earning a silver medal at the Summer Universiade in 1987 in Zagreb. After his retirement, he went on to work in several league front offices, including a stint as general manager of the Cleveland Cavaliers. He and the team split paths in 2010 and he landed a role with the Spurs before becoming the Atlanta Hawks' president of basketball operations and GM in 2012. Ferry made headlines in June of 2014 for reading an offensive comment out loud that was penned in a scouting report; Ferry subsequently took an indefinite leave of absence from the organization. In 2016 he became a special advisor to the GM of the New Orleans Pelicans. He became interim manager in 2019. He only held the position for a few months.