Danny Ainge Net Worth: Danny Ainge is an American basketball executive and retired professional basketball and baseball player who has a net worth of $10 million. Born Daniel Ray Ainge on March 17, 1959, in Eugene, Oregon, he is currently serving as President of Basketball Operations for the Boston Celtics. An exceptional high school athlete, Ainge was one of the rising NBA players, along Joe Dumars, to lead North Eugene High School to two consecutive state basketball championships in 1976-77, earning all-state honors both years.

Also being named to the 1977 Parade High School All-America team, Danny Ainge went on to play basketball at Brigham Young University. There, he earned the John Wooden award as college basketball player of the year. But at the same time, he made it to the majors with the MLB's Blue Jays, who had already selected him in the 1977 baseball draft. When Ainge got chosen in the NBA draft by the Boston Celtics, they first had to buy out his contract from the Blue Jays, thus enduring a legal battle over the rights to Ainge's contract. With Ainge on board, the Celtics won the NBA title in 1984 and 1986. In 1989, he was no longer part of the Celtics' team as he was traded to the Sacramento Kings for young center Joe Kleine. Despite Ainge's leadership, the Kings did not make it to the playoffs. A year later Ainge was again traded, this time to the Portland Trail Blazers, whom he helped reach the NBA Finals. After the 1991–1992 NBA season, Ainge became a free agent and went on to play with one more team before withdrawing from the sport for good. The Phoenix Suns was a team with whom Ainge concluded his career. Looking for a new identity, the Suns thought that his experience would help the team during the playoffs. Ainge assisted the team in reaching the NBA finals, where they lost to Michael Jordan's Bulls in six games. A great player as he was, Danny Ainge retired after the 1994–1995 season. He got inducted into the Oregon Sports Hall of Fame in 1999. 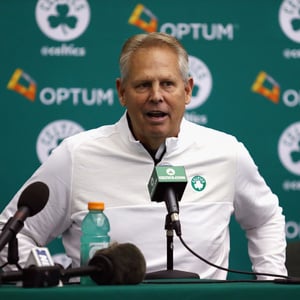