Damon Stoudamire Net Worth: Damon Stoudamire is a retired American professional basketball player who has a net worth of $46 million. Damon Stoudamire was born in 1973 in Portland, Oregon. The five-foot-ten point guard played college basketball at the University of Arizona from 1991 until 1995 where he became a three-time All-Pac 10 player and earned Pac-10 Player of the Year honors in 1995.

The Toronto Raptors drafted Stoudamire with the seventh overall pick during the 1995 NBA Draft. He made his rookie debut the same year and quickly set the league on fire, earning NBA Rookie of the Year accolades and making the NBA's All-Rookie First Team. Stoudamire played for the Raptors until he was traded to the Portland Trail Blazers in early 1998. He played with Portland until 2005 and later the Memphis Grizzlies from 2005 until 2008 and the San Antonio Spurs in 2008. After retiring from playing, Stoudamire went to work with Rice University as the director of player development. He was an assistant coach with the Memphis Grizzlies before taking work at Memphis and later his alma mater. Stoudamire retired with 11,763 career points, 5,371 assists, and 953 steals. He played for the U.S. men's national basketball team, taking bronze at the 1994 Goodwill Games in St. Petersburg and gold at the 1993 Summer Universiade in Buffalo. 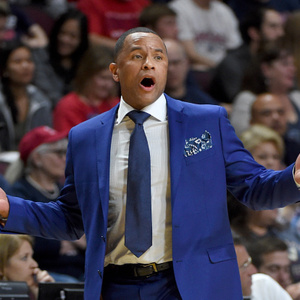