Chris Mullin Net Worth: Chris Mullin is an American retired basketball player and former general manager who has a net worth of $18 million. Chris Mullin was born July 30, 1963 in Brooklyn, New York City, New York. Best known as the general manager of the NBAs Golden State Warriors (American professional basketball team based in Oakland, California), he is a two-time Olympic Gold medalist and a two-time Naismith Memorial Basketball Hall of Fame inductee (in 2010 as a member of the 1992 United States men's Olympic basketball team ("The Dream Team"), and in 2011 for his individual career).

Mullin played shooting guard and small forward in the NBA from 1985 to 2001. After playing at St. John's University, during which time he won Big East Men's Basketball Player of the Year three times and was a member of the 1984 U.S. Men's Olympic Basketball team, Mullin was chosen as the seventh pick by the Golden State Warriors in the first round of the 1985 NBA Draft. He returned to the Olympics in 1992 as a member of the legendary Dream Team, which was the first American Olympic basketball team to include professional players. He played with the Warriors from the 1985–86 until the 1996–97 seasons. Mullin then played with the Indiana Pacers from 1997 until the 1999–2000 season. He retired after the 2000–01 season, returning to his original team, the Warriors. After his playing days were over, Mullin was hired as a special assistant by the Warriors, and was named Executive Vice President of Basketball Operations for the team in April of 2004. In 2009, the team announced that Mullin's expiring contract would not be renewed. In 2013, the Sacramento Kings hired him as an advisor. In 2010, Mullin was inducted into the Naismith Memorial Basketball Hall of Fame as part of the Dream Team. On Feb. 28, 2011, Mullin was elected to the College Basketball Hall of Fame. On April 4, 2011, Mullin was inducted again to the Naismith Memorial Basketball Hall of Fame, this time for his individual career. On March 19, 2012, Mullin's number was retired by the Golden State Warriors. 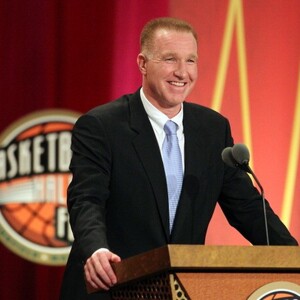