Chris Kaman Net Worth: Chris Kaman is a German-American professional basketball player who has a net worth of $30 million. Born in 1982 in Grand Rapids, Michigan, Chris Kaman played college basketball at Central Michigan University from 2000 until 2003. The seven-foot center earned MAC Player of the Year honors in 2003 and was named the MVP of the MAC Tournament. The Los Angeles Clippers drafted Kaman with the sixth overall pick during the first round of the 2003 NBA Draft. He played with the Clippers until 2011 before joining the New Orleans Hornets from 2011 until 2012, the Dallas Mavericks from 2012 until 2013, the Los Angeles Lakers from 2013 until 2014, and, currently, the Portland Trail Blazers as of the fall of 2014. Kaman earned NBA All-Star honors in 2010. He played for the German national team heading into the 2008 Olympics and during EuroBasket 2011. Kaman holds dual U.S. and German citizenship, applying for his citizenship to Germany in 2008 so he could play on the Olympic team. He is an outspoken advocate for ADHD misdiagnosis and openly discusses his experience with being misdiagnosed as a child and how it affected him into adulthood. Kaman has been married to his wife, college sweetheart Emilie VilleMonte, since 2010. 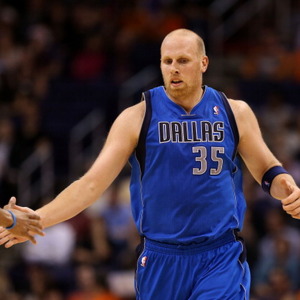