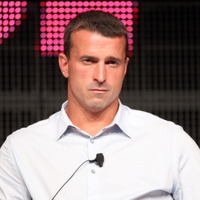 Chris Herren net worth: Chris Herren is an American former professional basketball player who has a net worth of $100 thousand. Chris Herren was born in Fall River, Massachusetts in September 1975. Herren was a 6'2 point guard who played for Durfee High School where he was the Boston Globe and Gatorade Player of the year in his senior season and was named to the McDonald's All-America Team. He played his college basketball for Boston College from 1994 to 1995 and Fresno State from 1996 to 1999. He was First-team All-Western Athletic Conference and All-Tournament Team in the Great Alaska Shootout in 1988. He also led the WAC in Assists per game with 7.2 in the 1998-1999 season. Herren was drafted #33 by the Denver Nuggets in the 1999 NBA Draft and played there from 1999 to 2001. He played for the Boston Celtics from 2000 to 2001. He then played professionally in Italy, Turkey, Poland, Iran, and China. He scored 63 points in a CBA game for the Beijing Ducks. He has had many felonies for drug use and once overdosed and crashed into a utility pole and was dead for 30 seconds. He went to rehab and is clean since 2008. He wrote the book Basketball Junkie: A Memoir which was released in 2011 and was featured in an ESPN documentary Unguarded.