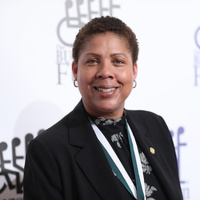 Cheryl Miller net worth: Cheryl Miller is a former college athlete, a coach, and a professional sportscaster, who has a net worth of $5 million dollars. Cheryl Miller was born in Riverside, California, and first rose to national attention as a high school basketball player. She became the first person to be named an All-American by Parade Magazine four times, and set California State records for points scored in a single season and during a high school career. She went on to play for the University of Southern California. At the 1984 Olympics in Moscow, she led the U.S. Team to a Gold Medal. The U.S. National Team also won the Pan American Games in 1983 and the Goodwill Games in 1986. She began coaching at USC in the early 90s, and then went on to coach the Phoenix Mercury in the WNBA. She retired in 2000. She began working as a sportscaster for ESPN in the late 80s, and then began working for TNT in 1995. Cheryl's brother is NBA All-Star Reggie Miller.