Chauncey Billups net worth: Chauncey Billups is an American professional basketball guard who has a net worth of $45 million dollars. Born September 25, 1976, in Denver, Colorado, Billups was nicknamed Mr. Big Shot for his late-game heroics. A current basketball guard for the Detroit Pistons, he was initially chosen third overall in the 1997 NBA Draft by the Boston Celtics.

Billups was a star basketball player for the University of Colorado at Boulder before being drafted by the Celtics. In 2004, he was honored by the University of Colorado when they retired his Jersey (#4). A 3-time All-NBA selection and a 5-time NBA All-Star, Billups also played for the Toronto Raptors, the Denver Nuggets, the Minnesota Timberwolves, the New York Knicks, the Los Angeles Clippers and Team USA. He was named MVP in the NBA Finals in 2004. Between 2001 and 2013, Billups went to the playoffs, with 5 different teams, 12 times. Billups and his wife, Piper, have three daughters: Cydney, Ciara and Cenaiya. His friend and fellow NBA player Kevin Garnett is godfather to daughter Ciara. Billups' younger brother Rodney was a point guard for the University of Denver and subsequently drafted to the NBA Development League. He is the first cousin of running back LenDale White. 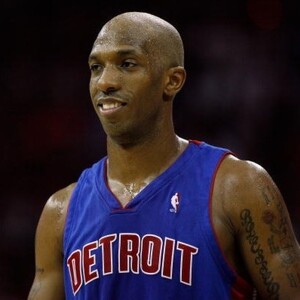