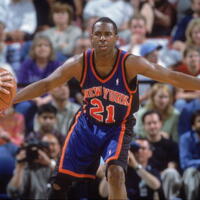 Charlie Ward net worth: Charlie Ward is an American former professional basketball player who has a net worth of $12 million. Charlie Ward was born in Thomasville, Georgia in October 1970. He was also known for being a college football player and was drafted into Major League Baseball. That's not a typo. He was actually an NFL, NBA and MLB draftee. He is known for being one of the only Heisman winners who did not eventually join the NFL. Ward was a point guard who played at Thomas County Central High School and Florida State. He was drafted #26 overall by the New York Knicks in the 1994 NBA Draft. Ward played for the Knicks from 1994 to 2004, the San Antonito Spurs in 2004, and the Houston Rockets from 2004 to 2005. As a quarterback at Florida State he won the Heisman Trophy, Maxwell Award, Walter Camp Award, Johnny Unitas Award, Davey O'Brien Award, Sullivan Award, and Chic Harley Award in 1993. The same year he was a consensus All-American and won the NCAA National Championship and was named the Sporting News Player of the Year. Ward was later inducted into the Florida Sports Hall of Fame and the College Football Hall of Fame.