What is Carlos Boozer's Net Worth and Career Earnings?

Carlos Boozer is an American professional basketball player who has a net worth of $60 million. Carlos Boozer played in the NBA for the Cleveland Cavaliers, Utah Jazz, Chicago Bulls, and Los Angeles Lakers. He also played on the US men's national basketball team, winning a bronze medal at the 2004 Summer Olympics and a gold at the 2008 Summer Olympics. Boozer spent his last playing season with the Guangdong Southern Tigers in China from 2016 to 2017.

Carlos Boozer was born on November 20, 1981 at a military base in Aschaffenburg, West Germany as one of five children of Carlos Sr. and Renee. He was raised in Juneau, Alaska. As a teen there, Boozer went to Juneau-Douglas High School, where he led the Crimson Bears basketball team to two consecutive state titles.

For college, Boozer committed to Duke University. Playing under coach Mike Krzyzewski, he led the Blue Devils to the 2001 NCAA Championship title. Among his other accomplishments at Duke, Boozer scored over 600 points during the 2001-02 season along with Mike Dunleavy Jr. Because he didn't complete his degree at the time, Boozer officially graduated from Duke in 2020.

Foregoing his final year at Duke, Boozer declared for the NBA draft in April of 2002. He was ultimately chosen with the 35th overall pick by the Cleveland Cavaliers. In his rookie season, Boozer averaged 10 points and 7.5 rebounds per game. For his second season in 2003-04, he averaged 15.5 points and 11.4 rebounds per game.

Boozer became a restricted free agent in 2004. During this time, he was offered a $70 million, six-year contract with the Utah Jazz, which he ended up signing. In his first season with the team, Boozer averaged 17 points and 9 rebounds per game, with an injury sidelining him for the end of the season. He began the 2005-06 season still recovering, and was only able to return in late February. Boozer went on to finish the season strong, however, averaging more than 20 points and nearly 10 rebounds per game. He subsequently had a promising start to the 2006-07 season, helping the Jazz win 11 of their first 12 games. Advancing to the playoffs, the Jazz took out the Houston Rockets in the first round, with Boozer tying his career-high 41 points in the second game. The Jazz went on to defeat the Golden State Warriors in the next round, before falling to the San Antonio Spurs in the Western Conference Finals. Boozer finished his first playoffs appearance with 23.5 points and 12.2 rebounds per game.

Boozer had another impressive season in 2007-08, becoming one of the league's top scorers and rebounders. He once again led the Jazz to the playoffs to face the Rockets for the second consecutive year. Although the Jazz beat the Rockets again, they fell to the Los Angeles Lakers in the second round. The next season, Boozer was sidelined for 44 games due to knee surgery; many questioned whether he would remain with the Jazz. Ultimately, he decided to stick around for one last season, during which he averaged 19.5 points and 11.2 rebounds per game.

In the summer of 2010, Boozer was traded to the Chicago Bulls. Although he missed 23 games because of an injury in his first season with the team, he still posted solid averages of 17.5 points and 9.6 rebounds per game. Moreover, Boozer helped lead the Bulls to a first-seed position in the Eastern Conference. The 2011-12 season was less productive, as his averages dropped to 15 points and 8.5 rebounds per game. Boozer improved with the Bulls in 2012-13, averaging 16.2 points and 9.8 rebounds across 79 games. In 2014, he was released by the Bulls. 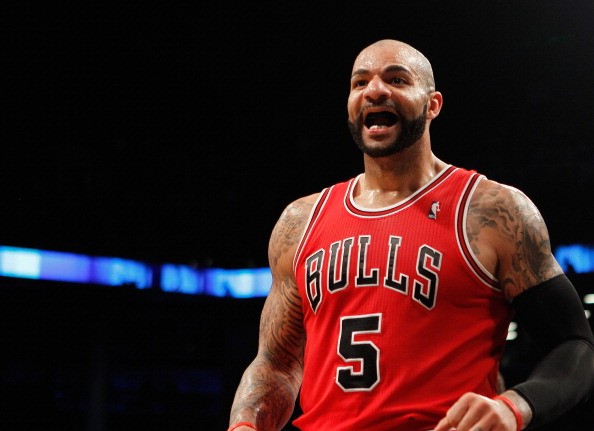 Following his release from the Bulls, Boozer was claimed by the Los Angeles Lakers off of amnesty waivers. He spent a single season with the team in 2014-15. Boozer went on to spend his final playing years in China with the Chinese Basketball Association's Guangdong Southern Tigers. In December of 2017, he announced that he was retiring.

Beyond the NBA, Boozer played on the US men's national basketball team. His first appearance representing the US came in 2001 at the FIBA U21 World Championship, where he won the gold medal. Next, in 2004, he competed with the US national team at the Summer Olympics in Athens, winning bronze. Boozer returned to the Summer Olympics in 2008 in Beijing, this time taking home gold with the US team after going unbeaten in the tournament.

In 2003, Boozer wed his wife CeCe; together, they had twins named Cameron and Cayden and another child named Carmani. The couple got divorced in 2015 after Boozer first filed in 2009. Boozer subsequently dated Aneshka Smith, whom he married in 2017.

Outside of his NBA career, Carlos Boozer is famous for an experience he had while renting a house to the musician Prince. In 2005, Carlos agreed to rent his home in Bel Air for $95,000 per month. Here's an interview where Carlos describes what happened next: