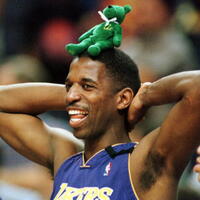 A. C. Green Net Worth

A.C. Green Net Worth: A.C. Green is an American retired professional basketball player who has a net worth of $15 million. A.C. Green was born in Portland, Oregon in October 1963. Green played college basketball at Oregon State University. From 1983 to 1985 he was an All-Pac-10 First Teamer. In 1984 he was named Pac-10 Conference Player of the Year and he was a third team All-American in 1985. Green finished second in OSU history for rebounding and fourth in scoring. In 2012 he was inducted into the Pac-12 Basketball Hall of Honor. Green was selected #23 by the Los Angeles Lakers in the 1985 NBA Draft. With the Lakers he was a three time NBA Champion in 1987, 1988, and again in 2000. He was selected as an NBA All-Star in 1990 and in 1989 was a member of the NBA All-Defensive Second Team. During his career Green also played for the Phoenix Suns, Dallas Mavericks, and Miami Heat. Green set the record for playing the most consecutive games in the history of the NBA and ABA in 1,192. He is a member and endorser of Financial Destination, Inc. and is a co-founder of myWinningFactor. He runs youth camps through the A.C. Green Youth Foundation. A.C. married Veronique in 2002.