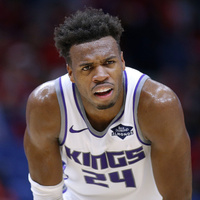 Buddy Hield net worth: Buddy Hield is a Bahamian professional basketball player who has a net worth of $6 million. Buddy Hield was born in Freeport, Bahamas in December 1992. He is a 6'4′ shooting guard who played at Sunrise Christian Academy in Bel Aire, Kansas. Hield played his college basketball at Oklahoma where he won the John R. Wooden Award, Naismith College Player of the Year award, Oscar Robertson Trophy, Jerry West Award, and Sports News College Player of the Year award in 2016. He was also a consensus first-team All-American in 2016 and a two time Big 12 Player of the Year and a two time first-team All-Big 12 selection. Buddy Hield was drafted #6 overall by the New Orleans Pelicans in the 2016 NBA Draft. He played for the Pelicans from 2016 to 2017 and joined the Sacramento Kings in 2017. In 2017 he was selected to the NBA All-Rookie First Team.