How much is Bruce Bowen Worth?

Bruce Bowen net worth: Bruce Bowen is an American former professional basketball player who has a net worth of $12 million. Bruce Bowen was born in Merced, California. Bowen was a 6'7″ small forward who played at Edison High School. He played his college basketball at Cal State Fullerton and was named to the All-Big West Conference First Team. He went undrafted in the 1993 NBA Draft and then played professional in France for Le Havre and Evreux. In 1995 he joined the Fort Wayne Fury of the CBA and he played for the Rockford Lightning from 1995 to 1996. Bowen went back to France and then re-joined the Rockford Lightning. He made his NBA debut in 1997 with the Miami Heat. Bowen played for the Boston Celtics from 1997 to 1999, the Philadelphia 76ers from 1999 to 2000, and the Miami Heat from 2000 to 2001. He finally settled in with the San Antonio Spurs where he played from 2001 to 2009. Bowen won three NBA Championships with the Spurs. He was also named to the NBA All-Defensive First team five times and the All-Second team three times. Bowen's #12 was retired by the San Antonio Spurs. He is known for being a "lockdown" defender and is an informal ambassador for child obesity awareness. Since retiring Bowen now works for ESPN as an analyst. 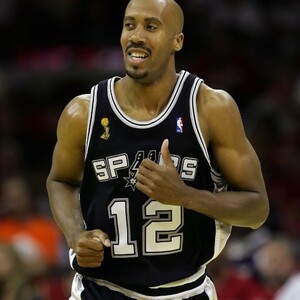