How much is Brittney Griner Worth?

Brittney Griner net worth and salary: Brittney Griner is an American professional basketball player who has a net worth of $3 million. Brittney Griner was born in Houston, Texas in October 1990. She is a 6'8″ center who was named WBCA High School Player of the Year and a McDonald's All-American at Nimitz High School. Griner played her college basketball at Baylor University where she won an NCAA Championship, was named NCAA Final Four Most Outstanding Player, and AP Player of the Year in 2012. She was also a Big 12 Player of the Year, Big 12 Defensive Player of the Year, Wade Trophy Player of the Year, and First-team All-American. Griner was drafted by the Phoenix Mercury as the #1 overall pick in the 2013 WNBA Draft. She won a WNBA Championship with the Mercury in 2014. Griner is a two time WNBA All-Star and two time WNBA blocks leader. She won an ESPY Award for Best Female Athlete in 2012. Britney married WNBA player Glory Johnson in May 2015 and the next month Griner filed for an annulment. The couple was suspended from the WNBA for seven games after a domestic violence incident. Brittney Griner's annual salary is $107,000 which is the WNBA league max. Like other top WNBA players, Britney periodically plays in China for huge paydays. For example, in 2014 she made $600,000 to play for a Chinese team for three months. 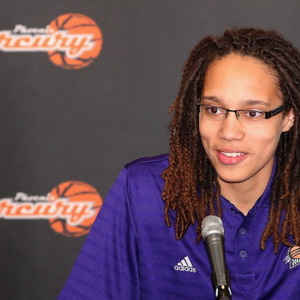