Brian Grant Net Worth: Brian Grant is a retired American professional basketball player who has a net worth of $35 million. Born in 1972 in Columbus, Ohio, Brian Grant played college basketball at Xavier University in Cincinnati. Grant was a two-time Horizon League Player of the Year while in school and was inducted into the Musketeers' Athletic Hall of Fame five years after graduation.

The Sacramento Kings chose Grant with the eighth overall pick during the 1994 NBA Draft. He averaged more than 13 points per game as a rookie, a number he increased as a sophomore who helped guide the Kings to a postseason appearance. Grant landed a five-year, $29 million deal, though his next season was marred by injury. Heading into the 1998 season, he signed a seven-year, $56 million contract with the Portland Trail Blazers. Grant later played for the Miami Heat from 2000 until 2004, the Los Angeles Lakers from 2004 until 2005, and the Phoenix Suns from 2005 until 2006. He finished his career with 7,933 points, 5,622 rebounds, and 923 assists. Grant won the J. Walter Kennedy Citizenship Award in 1999 and was named to the All-Rookie first-team during his first season in the league. Grant is well known for his charitable contributions to his community. In 2008, the former player was diagnosed with Parkinson's disease. 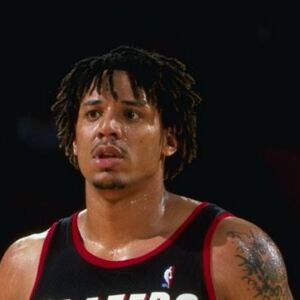