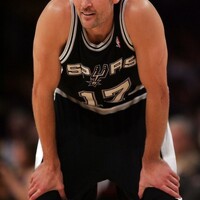 Brent Barry Net Worth: Brent Barry is a former American professional basketball player who has a net worth of $20 million. Born in Hempstead, New York in 1971, Brent Barry played high school and college basketball across the country from his birthplace. He played for the Oregon State University Beavers from 1990 until 1995 before the Denver Nuggets drafted him with the 15th overall pick during the first round of the 1995 NBA Draft. Barry didn't suit up for the Nuggets, but rather made his professional debut with the Los Angeles Clippers. He was part of the Clippers until 1998 before joining the Miami Heat and later the Chicago Bulls. Barry played with the Seattle SuperSonics (1999-2004), the San Antonio Spurs (2004-2008), and the Houston Rockets (2008-2009). He was a member of the NBA's All-Rookie Second Team in 1996 and won the league's slam dunk contest the same year. He is a two-time NBA champion, winning in 2005 and 2007 with the San Antonio Spurs. Barry appeared in close to 90 career playoff games, averaging 5.8 points per game during the postseason. The six-foot-seven, 210-pound guard finished his pro career with 8,488 points, 2,780 rebounds, and 2,892 assists. Since his retirement, Barry has worked in broadcast, commentating and hosting NBA TV's "NBA Gametime" program.