Bradley Beal net worth and salary: Bradley Beal is an American professional basketball player who has a net worth of $40 million. Bradley Beal was born in St. Louis, Missouri in June 1993. He is a 6'5″ shooting guard who played at Chaminade College Prep where he was the Gatorade Player of the Year in 2011 as well as a McDonald's All-American and first-team Parade All-American. In 2010 he was named the FIBA Under-17 World Cup MVP. Beal played his college basketball at Florida where he was named first-team All-SEC and SEC All-Freshman Team. He was drafted #3 overall by the Washington Wizards in the 2012 NBA Draft and has played with the team through the 2018 season. Bradley Beal was named to the NBN All-Rookie Team in 2013 and was an NBA All-Star in 2018. He won gold medals at the 2009 FIBA Americas U16 Championship and the 2010 FIBA World U17 Championship.

Contracts: In October 2019, Bradley Beal signed a two-year $72 million contract extension which should set him up for a record-setting contract in 2022.

Personal Life: Bradley proposed to his longtime girlfriend Kamiah Adams in January 2020. They have two sons together and Kamiah is a star on the VH1 reality series "Love & Hip Hop: Hollywood".

Real Estate: In October 2020, Bradley paid $6.8 million for a 7,200 square-foot home in Venice, California. That feels appropriate given his $72 million contract. Bradley and Kamiah also own a home in Bethesda, Maryland which they acquired in 2019 for $7.8 million. Their previous D.C. area home was sold in September 2020 for $3.5 million. 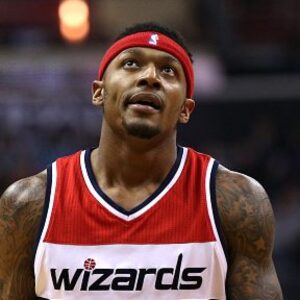