Bobby Hurley Net Worth: Bobby Hurley is an American professional basketball player and college basketball coach who has a net worth of $8 million dollars. Bobby Hurley was born in Jersey City, New Jersey in Jun 1971. Bobby played at St. Anthony High School where his father bob Hurley Sr. is the coach. Bobby's team won four consecutive Parochial B state titles. He only lost five games in high school and won a Tournament of Champions crown and the school was ranked #1 in the United States. In 1989 he was named McDonald's All-American MVP. He played point guard for Duke University from 1989 to 1993 and was a first-team All-American and won back-to-back national championships in 1991 and 1992. Bobby was named the NCAA Final Four Most Outstanding Player in 1992 and was a consensus first team All-American in 1993. Hurley was drafted #7 by the Sacramento Kings in the 1993 NBA Draft. He also signed a contract with the new shoe company ITZ. He was involved in a serious car accident his first season but returned to play in the NBA for five seasons total. After retiring he became a thoroughbred racehorse breeder and owner and was a scout for the Philadelphia 76ers. He was sued by PNC Bank in 2009 for defaulting on a $1 million loan used to purchase a horse. Hurley became an assistant coach at Wagner in 2010 and then was associate head coach at Rhode Island in 2012. He became head coach of the Buffalo Bulls men's basketball team in March 2013. Bobby appeared in the 1994 movie Blue Chips. Hurley coached Buffalo to their first NCAA tournament appearance before becoming the head coach at Arizona State in 2015. 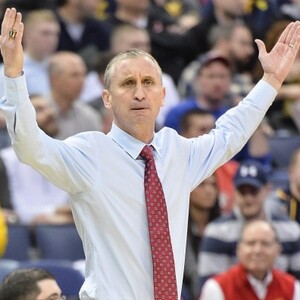