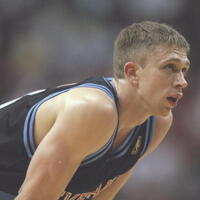 Bob Sura Net Worth: Bob Sura is a former American professional basketball player who has a net worth of $18 million. Bob Sura was born in Wilkes-Barre, Pennsylvania, in 1973, and played college basketball for the Florida State University Seminoles from 1991 until 1995. While in college, Sura earned ACC Rookie of the Year honors as a freshman. The Cleveland Cavaliers drafted him, a six-foot-five, 200-pound shooting guard, with the 17th overall pick during the first round of the 1995 NBA Draft. Sura played with the Cavaliers for the next five years before the team traded him to the Golden State Warriors in 2000. He played with Golden State until 2003 before joining the Detroit Pistons from 2003 until 2004, the Atlanta Hawks in 2004, and, lastly, the Houston Rockets from 2004 until 2005. Sura's decade-long career came to an end after his season-long stop with the Rockets. Sura lost the 2006 season due to injury and was released by the Rockets heading into the 2007 season. He finished his pro playing career with 5,654 points, 2,240 rebounds, and close to 2,500 assists. Sura averaged 8.6 points per game to go along with 3.4 rebounds and 3.8 assists. Sura, an avid poker player, once appeared on "The Big Game" program as part of the PokerStars series.