Bob Cousy net worth: Bob Cousy is an American former professional basketball player and coach who has a net worth of $3 million. Bob Cousy was born in Manhattan, New York in August 1928. He was a 6'1″ point guard who played at Andrew Jackson High School. Cousy played his college basketball at Holy Cross where he won the NCAA championship in 1947 and was a consensus first-team All-American in 1950 and had his #17 retired by the school.

Bob Cousy was drafted #3 overall by the Tri-Cities Blackhawks in the 1950 NBA Draft. He played for the Boston Celtics from 1950 to 1963 and for the Cincinnati Royals from 1969 to 190. He also served as the coach of the Celtics from 1963 to 1969 and of the Royals from 1969 to 1973. Cousy won six NBA championships with the Boston Celtics and was named NBA Most Valuable Player in 1957. He was a 13 time NBA All-Star and two time NBA All-Star Game MVP. He was selected to the All-NBA First Team 10 times and led the league in assists eight times. His #14 was retired by the Celtics and he was inducted into the Basketball Hall of Fame and the College Basketball Hall of Fame. Cousy also served as the first president of the National Basketball Players Association. 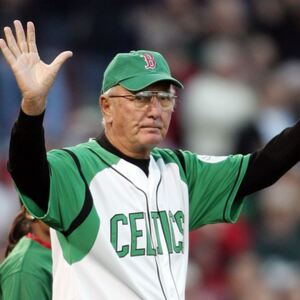