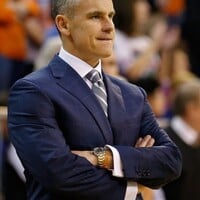 Billy Donovan net worth and salary: Billy Donovan is an American college basketball coach and former college and professional basketball player who has a net worth of $14 million. Billy Donovan earned his net worth as the current head coach of the Florida Gators men's basketball team at the University of Florida. He has been the head coach of the Florida Gators since 1996 and led the Florida Gators to two consecutive National Collegiate Athletic Association (NCAA) national championships in 2006 and 2007. He was born in Rockville Centre on Long Island, New York. His father Bill Donovan, Sr., was the third leading scorer in Boston College men's basketball history, and he sometimes coached Billy's youth basketball teams while working in the textile industry. Billy Donovan was the starting point guard for the Providence Friars men's basketball team and led the Friars to the 1987 Final Four; subsequently he is one of only four men to appear in the NCAA Final Four as both a player and to win an NCAA national championship as a coach. Before his work at the University of Florida, he spent most of the 1987-88 season as a reserve guard for the New York Knicks. After leaving the NBA, he worked briefly as a Wall Street stockbroker, and then served as the assistant coach for the Kentucky Wildcats under his former Providence Friars coach, Rick Pitino. He accepted his first head coaching position at Marshall University in 1994, and in 1996 joined the University of Florida to replace then basketball coach, Lon Kruger. He was offered an initial six-year contract and took the University of Florida from mediocrity to back-to-back national championships. While offers presented themselves to join other organizations over the years, Donovan has maintained his relationship with the University of Florida and is invested in its success. In 2011, Donovan was named as the "SEC Coach of the Year," and in 2014 Donovan lead The Gators to a 30-game winning streak as they reached the Final Four, defeating each of their opponents by double digit margins. The team earned the number one overall seed in the 2014 NCAA tournament. Donovan married his wife, Christine D'Auria, in 1990 and the couple have four children: Hasbrouck, Bryan, Connor, and William III. Billy Donovan's salary is roughly $3.9 million.